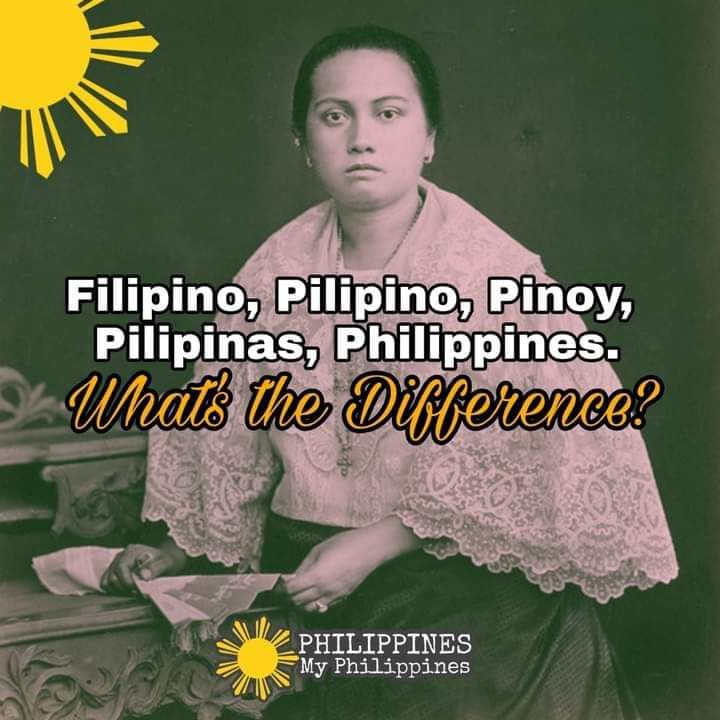 Filipino is the Hispanized (or Anglicized) term for both the people and the language of the Philippines. It is also acceptable to say Filipino for a male and Filipina for a female. Philippino should never be used or said because it does not sound right.

Pilipino, on the other hand, is how Filipinos refer to themselves or to their national language. When it comes to language, the term Pilipino is synonymous with Tagalog, which is widely spoken in Manila, Bulacan, Bataan, and Batangas.

Because most Filipino languages lack the “F” sound, the “P” or “Ph” is used (with the exception of some native people in the Cordillera and Mindanao, like the Ifugao and the Teduray). The Filipino alphabet now has 28 characters, with the letters F, and Ng joining V, Q, X, Z, and other Latin characters.

The same is true for Pilipinas, the name of the country. It derives from the Hispanized word Filipinas, which was the old Spanish name for the country, Las Islas Filipinas (Anglicized equivalent: Philippine Islands or P.I., when it was still a colony). The “Ph” stands for Philip, the English equivalent of King Felipe II of Spain.

Pinoy is a colloquial term for Filipino that refers to the people but never the language. When referring to a female, it becomes Pinay, though Pinoy is also used to refer to both male and female.

Since 1987, the “modernization” of the Philippine national language has incorporated these new characters into the alphabet, displacing the old Abakada (or baybayin). Part of the reason is that traditional Abakada is limited and occasionally sounds funny or becomes the punchline of jokes, such as the way certain words are spelled.

Bote (bottle) and titik (letters), for example, are spelled Abakada style as “ba-o-ta-e” and “ta-i-ta-i-ka,” respectively, which makes children die laughing! The standard way to spell these words is “bi-o-ti-ey” and “ti-i-ti-i-key” or something along those lines.