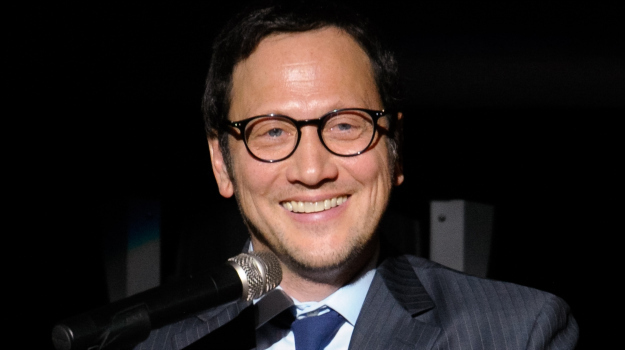 Hollywood star Robert Michael “Rob” Schneider takes pride in being part-Filipino and believes in the Pinoy experience so much he asked his mom, Pilar, to write a screenplay about her life in the Philippines for a movie he dreams of doing someday.

“He wants me to share my experiences in the Philippines and my experiences during the war, so I started it,” says Mommy Pilar, who is married to Jewish real estate broker Marvin, in an exclusive interview with ABS-CBN’s Nagmamahal Kapamilya. “Hopefully, it will be shot and screened soon.”

Asked why she thinks Rob, her youngest son, has developed a certain interest in the Filipino story, Mommy Pilar recounts that when he was younger, she used to put him to bed with her stories about the Philippines and her experiences during the World War II.

This is also the reason why she thinks Rob, more than her other kids – Stanley, April and John – is the most Filipinized.

“He doesn’t look it, but he has acquired the values, customs of Pinoys,” she adds. “Maybe, it is because, as the youngest, while my other kids were busy doing other things, Rob spent the most time with my kapamilya. Rob was always mingling with my relatives.”

Mommy Pilar even recalls how a young Rob questioned her why Filipinos use the third person point of view to show respect. Also, she says that her kids are aware that they have to kiss their relatives when they arrive and leave.

“That’s the Pinoy custom I have shared with them. Hindi na nga lang yung pagmamano. But kissing and pagmamano are signs of respect, kaya ok lang.”

His Filipino upbringing has made Rob develop such a strong bond with members of his family. In fact, he even involves them in his showbiz life. His brother John manages Rob’s career.

Mommy Pilar agreed to do cameo roles in Rob’s movies like The Animal, Hot Chick and Deuce Bigalow.

Rob may have acquired the customs of Pinoys, but Mommy Pilar regretfully says they have a very limited Filipino vocabulary, because “it went against my profession.”

Mommy Pilar, a kindergarten teacher and graduate of University of Santo Tomas with a degree in Bachelor of Arts major in English Literature, admits she made it a point to speak in English in front of her kids. But she quickly adds that Rob knows words like salamat and bastos.

Asked how her youngest son learned what bastos means, she amusingly recalls how she teased Rob before that he is bastos. Somehow, he never forgot the meaning of the word.

Aside from Filipino words and customs, Mommy Pilar reveals her family also enjoys Filipino food. “I cook Filipino dishes especially adobo and pinakbet. I also make sapin-sapin and bibingka. They love it.”

According to her, Rob may have basically spent all his life in the US, but he has always been, and will always be proud to be a Filipino.

Seven years ago, he visited Manila for the promotional tour of his movie Deuce Bigalow: Male Gigolo.

Mommy Pilar traces Rob’s talent for comedy to the Filipino in him and to her husband Marvin “who has a very keen sense of humor.”

Jessica Cox is a Filipino-American professional motivational speaker. Cox was born without arms, a rare…