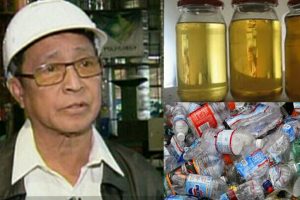 Isn’t it strange how a potential solution for rising fuel costs and the chronic problem of plastic waste management in the Philippines isn’t getting enough attention from most major media outlets?

Jayme Navarro, a Filipino inventor from Bacolod, has discovered a way to convert plastic trash into usable fuel, namely gasoline, diesel, and kerosene. Navarro came across the method when he was trying to convert plastic waste back into its basic components and original form.

The process, called Pyrolysis, starts by drying the plastics, shredding them into smaller pieces, and heating them in a thermal chamber. The chamber has very low oxygen, so the plastic actually melts instead of burning. The melted plastic produces vapors, which is then passed into cooling pipes and distilled into a liquid.

This liquid is chemically identical to regular fuel, but has lower sulfur content, making it burn cleaner. With low production costs, the fuel is also around 10-20% cheaper. Aside from using actual waste plastic in the production of cheaper fuel, the process is also proven to be environment-friendly.

Navarro and his company, Poly-green Technology and Resources, Inc., which is based in the Payatas area where most of the plastic waste comes from, produces around 1,600 liters of fuel from recycling two metric tons of plastic daily.

The process of Pyrolysis has been around for quite some time, but Navarro created their own unique system and has an approved patent with the Philippine Intellectual Property Office.

In 2008, his research was even awarded the winner of the Outstanding Creative Research category by the Department of Science and Technology (DOST).

Navarro has plans of putting up additional facilities in Rizal and the other surrounding provinces of Metro Manila, with the coordination of local government units.

Wouldn’t you say that Navarro deserves more media mileage in order for him to bring his work to the forefront? Backed with more investors, large-scale implementation of Navarro’s system would cement it as a viable alternative fuel source. It will significantly reduce not just the country’s garbage problem, but also pollution from vehicle emissions, and would definitely help save the environment by providing all Filipinos with a cheaper source of fuel.