A Filipina who grew up in slums in the Philippines has just been selected to become the first female president of the Utah Valley University (UVU) in the United States.

In a report posted on its website, the school announced that Astrid Tuminez has been unanimously chosen from a field of international and national candidates to head the publicly funded university starting this fall. She will be the seventh president and first woman leader in the university’s history.

“[She] has proven to be a dynamic leader across academic, non-profit, public policy, and corporate sectors,” said Daniel W. Campbell, chair of the Board of Regents at UVU.

Tuminez currently works for Microsoft and holds degrees from Harvard University and Massachusetts Institute of Technology, but prior to her storied career, she grew up in poverty in the Philippines.

“My father is not here anymore. My mother is 84. Neither of my parents went to college,” she said during her acceptance speech that was broadcast in social media. “My mother had a very hard life… My sister raised me. She was only 15 years old and had to raise six siblings.”

It was when she was five years old when things started to change.

“I was raised in the slums of the Philippines and I was five years old when Catholic nuns offered me and my siblings a chance to go to school. So that changed the entire trajectory of my life,” Tuminez was quoted by Desert News Utah as saying.

She went on to finish high school in Union High School of Manila and in 1982, she managed to travel to the United States and later acquired a US citizenship.

According to her LinkedIn profile, Tuminez earned a Master’s degree for Soviet Studies at Harvard University and a PhD for Political Science and Government at the Massachuetts Institute of Technology.

She was voted unanimously by a 24-member selection committee at UVU and will succeed Matthew Holland (below, left), the school’s president since 2009.

“Out of an impressive field of candidates, Dr. Tuminez rose to the top in the search for the next president to lead UVU,” David L. Buhler, Utah Commissioner of Higher Education. “She articulated a clear and compelling vision for UVU, and she understands the value of collaboration within Utah’s system of public colleges and universities.” 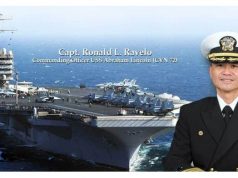