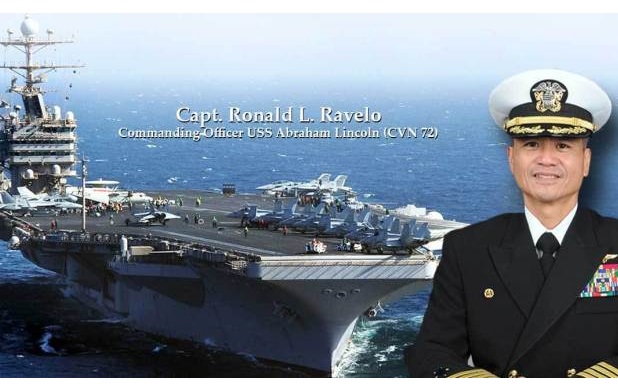 Capt. Ronald Ravelo relieved his brother-in-law, Capt. Karl Thomas, as commander of the USS Abraham Lincoln — a change of command considered unprecedented for the U.S. Navy.

Ravelo also became the first Filipino-American to take command of a carrier. Thomas, the outgoing commander of the Lincoln, will lead the USS Carl Vinson, which is preparing for deployment from San Diego.

“I really couldn’t think of a better officer to follow,” Ravelo said after the ceremony.

Guest speaker Rear Adm. Troy Shoemaker joked that for Ravelo’s sister — Junifer, the wife of Thomas — planning the event must have been interesting.

“With the two principals related by marriage, this is a first for me and probably our Navy, which makes today’s ceremony even more special and allowed the families to plan a twofer, a change of command and a summer family reunion,” Shoemaker said. “I can imagine that the logistics for this ceremony were a bit like planning a wedding reception, except that the proverbial bride and groom are your husband and brother, which begs the question: Who’s the groom and which side of the aisle do you sit on?”

After shaking his brother-in-law’s hand and reading his orders, Ravelo stepped from behind the podium, asking the crowd that gathered to wait just a minute before he spoke.

He pulled out a cellphone and snapped a quick selfie — an effort to relate to some of the young sailors he’ll now be leading.

The crowd was made up of about 500 of the roughly 2,500 sailors on the Lincoln, as well as friends and family, who were gathered on the lawn behind Victory Landing Park in downtown Newport News. None was more proud, Shoemaker said, than Ben Ravelo, Ravelo’s father, who is a retired Navy chief.

Ravelo said he is proud to represent service members such as his father, who joined the Navy in the Philippines, leaving behind friends and family to serve a country where he didn’t even know the language.

“I well with pride,” he said. “But I don’t feel like I’m anymore special than any other officer.”

Change-of-command ceremonies typically take place on decks of their respective carriers, however the Lincoln is undergoing a mid-life maintenance on the docks of Newport News Shipbuilding. So Thomas asked that the ceremony take place in the shadow of the aircraft carrier Enterprise, the world’s first nuclear carrier, which is being decommissioned in the shipyard just behind the stage.

Thomas took command of the ship two years ago as it started the four-year refueling and overhaul process, which often spells trouble for a bored crew with an average age of 22.

Shoemaker, the rear admiral, praised Thomas for his leadership during the maintenance period.

“Sailors are meant to be at sea,” he said.

The crew has logged more than 25,000 hours of community service. By the time they depart Newport News, they will have logged more than 24 million hours of maintenance on the ship. Thomas surprised about 25 sailors and officers by promoting them on the spot.

“There is plenty of work still to be done,” Ravelo said.

The ship is not expected to leave the yard until October 2016 and deploy in 2017 after an extensive training cycle.

“It goes without saying, but I’m extremely proud of my relief. I know him pretty darn well,” Thomas said of Ravelo, whom he said he calls for advice on a regular basis. “Ron, I promise to keep answering the phone in return.

“This crew will give you 110 percent. They are hungry to return the Abraham Lincoln to sea and to her mission.”