Buenos Aires (Reuters) — Argentina’s coast guard has sunk a Chinese trawler that was fishing illegally within its territorial waters, the coast guard said on Tuesday, marking a first test for relations between President Mauricio Macri and Beijing.

In a high-seas chase, a coast guard vessel on Monday pursued the fishing vessel Lu Yan Yuan Yu 010 toward international waters, firing warning shots across the Chinese boat’s bow as it attempted to raise the crew by radio.

“On several occasions, the offending ship performed maneuvers designed to force a collision with the coast guard, putting at risk not only its own crew but coast guard personnel, who were then ordered to shoot parts of the vessel,” the coast guard said in a statement.

It was not clear if the vessel sank on Monday or Tuesday.

Macri’s center-right government, which took office in December, will likely be keen to avoid a diplomatic ruckus with the Asian powerhouse which has gained a strong foothold in South America, traditionally the United States’ back yard.

Relations between Argentina and China tightened under former leftist leader Cristina Fernandez. While Macri promised during last year’s presidential race to review all new contracts with China, he has shown no sign of doing so. Among those deals were an agreement to finance and build two nuclear power plants in Argentina in a deal worth up to $15 billion.

A spokesman for Argentina’s foreign ministry said the judiciary was investigating the incident. Officials at the Chinese Embassy in the Argentine capital, Buenos Aires, were not available for comment.

Coast guards using radar picked up the trawler fishing off the coast of Puerto Madryn, Chubut province, a zone known for squid.

Shots were fired into the hull of the Lu Yan Yuan Yu 010 after it ignored radio calls to allow the Argentine coast guard to board and repeated warning fire. The crew abandoned ship when the vessel began to go down.

Four crewmen were rescued by the coast guard while others were picked up by another Chinese vessel shadowing the pursuit. 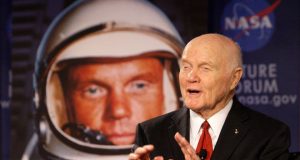 TrendingThisMinute Team - December 8, 2016
His legend is other-worldly and now, in his 95th year, that’s where John Glenn has gone. An authentic hero and genuine American icon, Glenn died...