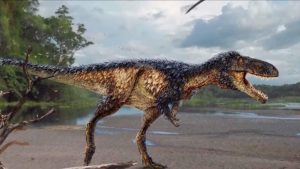 Scientists have discovered a new species of dinosaur that helps explain how the terrifying Tyrannosaurus rex evolved.

Bones found in Uzbekistan belong to a creature that looked like the T-rex, but was only 10-12ft long and weighed around 600lbs.

A T-rex could be around 50ft long and weigh more than 20 times as much.

The discovery of the earlier dinosaur helps fill in a gap in the tyrannosaur fossil record that has frustrated researchers for years.

Lead researcher Stephen Brusatte from the University of Edinburgh said: “It’s one of the very closest cousins of T-Rex, but a lot smaller – about the size of a horse.

“And it comes from the middle part of the Cretaceous period – a point where we have a huge gap in the fossil record.”

The newly-discovered dinosaur – dubbed Timurlengia euotica – lived around 90 million years ago, south of what is now the Aral Sea.

Timurlengia euotica’s inner ears already had tyrannosaur features associated with agility and hearing low-pitched sounds, which might have helped it detect prey at a distance.

But it lacked the massive bone-snapping teeth and large sinuses of its later relation.

The fossils found include a braincase and bones from the neck, back, tail, feet and hands. 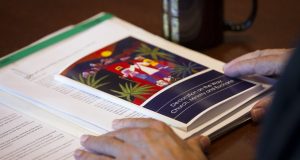