The US Navy has deployed a small armada to the disputed islands in the South China Sea, according to The Navy Times.

America’s USS John C. Stennis aircraft carrier, destroyers Chung-Hoon and Stockdale, cruisers Antietam and Mobile Bay, and Japan’s Blue Ridge were deployed after China installed HQ-9 surface-to-air missiles on Woody Island, one of the most central swathes of land in the disputed waters.

“China is clearly militarizing the South China Sea, and you’d have to believe in the flat Earth to think otherwise,” Cmdr. Harry Harris, of the US Pacific Command, recently warned Congress.

“Our ships and aircraft operate routinely throughout the Western Pacific — including the South China Sea — and have for decades,” Navy Cmdr. Clay Doss said in a statement.  “In 2015 alone, Pacific Fleet ships sailed about 700 combined days in the South China Sea.”

But a carrier strike group’s presence in the disputed waters speaks for itself.

“Clearly the Navy and DoD is demonstrating its full commitment to presence and freedom of navigation in the region,” said Jerry Hendrix, a retired Navy captain and analyst with the Center for a New American Security in Washington, DC, told The Navy Times. “With the full carrier strike group and the command ship, the Navy is showing the scope of its interests and ability to project presence and power around the world.” Additionally, US Secretary of Defense Ash Carter said on Tuesday that the US is willing to spend $425 million on joint military exercises with nations in the Pacific that feel threatened by China’s militarization of the major trade route.

Of course, China denied militarizing the region and went as far as to blame the US instead, warning that the US was committing a “miscalculation of the situation.”

“If you take a look at the matter closely, it’s the US sending the most advanced aircraft and military vessels to the South China Sea,” Fu Ying, the spokeswoman for the Chinese legislature, said.

China has created islands with military-grade runways and missile-defense hardware on islands claimed by Japan, Vietnam, the Philippines, Taiwan, Malaysia, and Brunei. 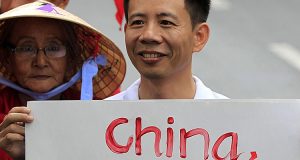 TrendingThisMinute Team - February 27, 2016
BEIJING (Reuters) - China "really needs" its defences in the South China Sea in the face of a militarisation process being pushed by the United...