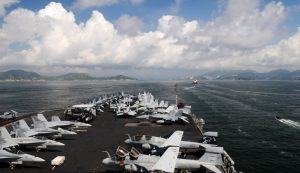 South China Sea continues to be a tense issue as the United States now decided to send ships and an aircraft carrier to the region in light of Beijing’s threat. According to an analyst, American counter-moves are necessary because China may soon hold Western allies hostage if it manages to control resources in the disputed region.

The US and China are at odds with each other since the latter was accused of militarizing the highly disputed area. China warned the US of interfering in the South China Sea dispute but the United States maintained its position to keep things at bay in the area. Over the course of the last few days, the US Navy already dispatched several ships and an aircraft carrier to the region. Furthermore, Washington Post reported that thousands of U.S. sailors were also deployed to in light of China’s threat.

Navy officials confirmed that the USS John C. Stennis arrived in the disputed region on Tuesday. The carrier also came with the cruiser USS Mobile Bay including the destroyers USS Stockdale and USS Chung-Hoon.

“For a lot of people, maybe who didn’t grow up in the Vietnam era, the South China Sea sounds like it’s a long way away.  Here’s a key fact: every barrel of oil that goes to Japan, South Korea, and Taiwan – key allies and trading partners of the United States – goes through the South China Sea,” Breitbart quoted Bolton in an interview.

“If the Chinese take what are now international waters, and make them into a Chinese lake, they’ve got their hands around the throats of those economies. They’ve got forward position among the nations of Southeast Asia, and they’re right on the edge of the Indian Ocean,” he added.

The official also concluded that there is a lot at stake at the moment. He also mentioned that the next president should be able to make the American people understand the “relationship between foreign policy and domestic policy.” 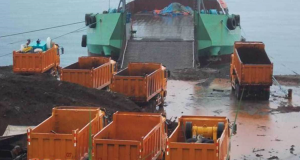 TrendingThisMinute Team - March 29, 2016
China is not only stealing and occupying Philippine Territories at the West Philippine Sea or Spratly regime if islands but it is, at the...