The Permanent Court Arbitration (PCA) in The Hague with five judges has heard the long deliberation from the equal number of counsel is about four to six months away from its long- awaited decision. A verdict that will change how we live and conduct our commerce in the South China Sea (SCS), also known as the West Philippine Sea.
This verdict is so important in this contentious battle for islets, shoals, the adjacent waters and its bounty. Will it prove that China’s aggressive maritime behavior is illegal and that the Philippines is right all along? China overstepped its bounds and the PCA’s decision upholds the rule of law though not necessarily enforceable by the United Nations’ Law of the Sea (UNCLOS).
But, nonetheless it will be damaging for China not to comply: her reputation in the region and with the rest of world will be adversely affected by huge internationally-charged negative fallout. The non-compliance will be a blot on China’s highly-touted “peaceful economic” rise affecting not only her economy but importantly China’s world standing and as a responsible power. Not to mention it may adversely affect the Chinese diaspora if she continues to act as a belligerent nation when a U.N. body had already declared that her action is an affront to world commerce and the established international law. In effect the world is saying that the unprovoked invasion of the SCS also dubbed as the rape of reefs, a Chinese salvation or sorrow, a Pyrrhic victory with Chinese characters?

But to be fair, China is not a bully who delights to punish the Philippines even when it seems that she does. Rather, she’s only a bully towards her neighbors for their space and for their resources. This is part and parcel of China’s design a quest to feed her insatiable appetite of 1.4 billion people now with a $16 trillion economy and a growing middle-class. In this post-modern age China has been doing this encroachment towards her once amicable neighbors discretely and astutely so as not to trigger a regional military showdown with the U.S. and Japan. Except for Beijing’s May 2014 CNOOC incident where she planted an oil rig well inside Vietnam’s 200 nautical miles Exclusive Economic Zone (EEZ) and the Scarborough Shoal stand-off with the Philippines in April 2012, these were considered as near-triggers but for the most part these Chinese actions were not overly provocative but just as destructive. This is the nature of the Chinese as a perpetrator – small, incremental changes to the status quo of the SCS labeled as China’s creeping invasion of the reefs – but just as deadly and very effective.

It must be stopped not by a military onslaught but by other means – as the old Western saying goes there are many ways how to skin a cat and to quote an old Chinese proverb fool me once, shame on you; fool me twice, shame on me. In the aftermath of the Scarborough Shoal row, the Philippines had no other recourse but to sue China through an international arbitration. Prior to that incident, she had already lost Mischief Reef when China crept up on it in May 1995. Incidentally, this is not just a battle in the courts between China and the Philippines but more importantly a challenge to the established U.N.’s Law of Sea (UNCLOS) formulated back in 1982, is also being tried here. In essence, can one nation take over 90 percent of a global commons called South China Sea with a $5 trillion trade that passes through it each year with impunity? The Caribbean Sea and the Mediterranean Sea are in the same class of bodies of water. Then, it is mind boggling to let Libya own the Mediterranean Sea but that is what China wants to do in the South China Sea.

The good news of the court’s decision means that now we have the mandate and the authority to pursue and protect our interests in SCS. PCA’s decision has brought clarity how to conduct business in this hugely important body of water. The cloud of ambiguity or darkness that existed before have now been lifted. The Court’s decision has so embolden the Filipinos to act but also has inspired other peace-loving nations around the SCS, same in the East China Sea, the Indian Ocean and nations of the Pacific Rim both the poor and wealthy nations alike.

As the floodgates have now been opened, the imminent decision in favor of the Philippines is close at hand, the busy ports of Palawan are a beehive of frenzied activity. The Friends of South China Sea (FSC), a loose coalition of environmentalists and NGO’s are amazing in Palawan – the closet island to the Spratlys and the Scarborough Shoal. Ships, cranes, tug boats even dredgers from all different flags of local and foreigners alike have descended upon Palawan. Already, while waiting for the verdict there were groups in the Philippines from mostly non-government organizations (NGO’s) now embolden, pumped up and now mobilized to enforce the Court’s decision. There has been a lot rejoicing, partying and celebration with the eventuality of doing actual work in the South China Sea. In particular in the Philippine zone of responsibility in the Spratlys, the Reed Bank and Scarborough Shoal – all within the country’s 200 NM limit as provided for by UNCLOS decision.

The immediate task is to rescue the reefs. The most stressed reefs are these: the Johnson South, Gaven, Cuarteron, Fiery Cross, Hughes and Eldad in the Spratlys alone. The reefs pristine former self are now just a figment of imagination. Imagine the last of the Galapagos-like reefs of Asia now just blocks of reclaimed sand and man-made concrete bunkers with gun emplacements, docks and heliports with their little red flags flying over them – barren and lifeless. Further north, Mischief Reef and Scarborough Shoal would have to wait just a little longer. The immediate environmental work and recovery of the first five reefs is immense as their destructions were primarily done by none other than the coral reef killers in the form of Tiang Jing Hao and another one named Nina Hai Tuo. They were reported as early as December 2013 by the Philippine government, AIS tracking and a Russian magazine dredging sand and marine life at an extraction rate of 4,500 m3 per hour per dredger – very efficient dredgers and killing machines. 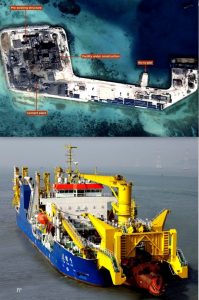 The rescue operation and restoration of these reefs are no work for a slouch. The FSC will need to demolish, decontaminate and clean these up with a UN watchdog documenting the process. And then be left alone by men for a while to bring them back to their former glory or something close to it. Unfortunately China’s efficiency in degrading these once pristine reefs is irreversible. An FSC “crimes against humanity” lawsuit is being lodged to help defray the cost of restoration.

Again, the good news is that the perpetrator is now driven back to its official southernmost territory, twelve nautical miles off Hainan islands. It will be a long arduous process, but nature has a way of healing itself. You will be hearing a lot more from the FSC, a loose but resolute and dedicated coalition of non-government organizations backed by nations mentioned above. FSC has now a growing following, for example, the province of Palawan and Zambales have joined, many internationally-funded NGO’s and environmentalists like Greenpeace, The Turtle Conservancy, Rescue the Reefs, Sea Shepherd and of course the big-gun partnership with ASEAN, Philippine Coast Guard and Maritime Agencies, Vietnamese Navy, Japanese Self Defense Forces, American, Australian and even some concerned Chinese citizens.

Its main goal is not to only rescue and restore these reefs but also to protect them by seeking justice by pursuing litigation, compensation and thus protecting them from other “perpetrators” from overfishing, poaching, dredging and other nefarious environmental activities, all monitored. Its success rate is measured by the number of litigation against individual, parties, poachers and other nations who are caught abusing SCS.

That one day, its eventual mission will be realized. That the hard work of rescuing and protecting these reefs will be completed. That SCS as a global commons, as it stands in the near future is free from any nation’s political and military influence – safe and open for ships and marine life to use for now and at least in our lifetime. 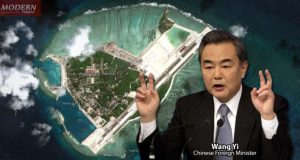