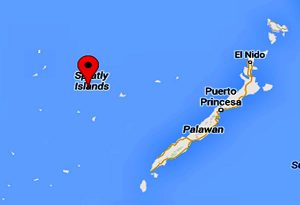 Update: “To prevent the ship from being grounded for a long period of time, affecting navigation safety and damaging the marine environment, the Rescue and Salvage Bureau of China’s Ministry of Transport recently dispatched the rescue and salvage ships to the Jackson Atoll to tow away the grounded ship and properly handle it,” Hong told media at a regular briefing.

MANILA, Philippines – The Chinese have taken over another traditional Filipino fishing ground near Palawan where they have stationed up to five ships to keep local fishermen at bay, sources said.

Now effectively under Chinese control is Quirino or Jackson Atoll, which has been a rich source of catch for a long time for fishermen from Palawan, Southern Luzon, Western Visayas and even Manila.

Gray and white Chinese vessels have not left the atoll, which Filipino fishermen also call Jackson Five, because of the existence of five lagoons in the area.

The Chinese are claiming almost the entire South China Sea, including the West Philippine Sea. Manila is contesting Beijing’s claim before an international arbitral court based in The Hague.

Filipino fishermen lamented the Chinese vessels would not allow them to come near or linger in the Quirino Atoll.

The area is between the Philippine-occupied Lawak Island and the Chinese-occupied Panganiban (Mischief) Reef.

Fishermen from Mindoro Occidental who asked not to be named said Chinese boats chased them away when they tried to enter the area last week.

“These gray and white Chinese ships, around four of them inside the lagoon, prevented us from entering our traditional fishing ground,” one of the fishermen said.

Kalayaan Mayor Eugenio Bito-onon Jr. said the Chinese ships have been staying in Quirino Atoll for more than a month now. “They have many ships there,” he said, without elaborating.

Philippine air patrol has confirmed the presence of at least four Chinese coast guard ships in the Jackson lagoons.

A Palawan-based fishing operator said the Chinese began deploying ships to Quirino Atoll after a Manila-based fishing carrier boat ran aground in the area due to bad weather.

The fishing operator said his boats have since been avoiding the area due to the menacing presence of presumably armed Chinese ships. “We can’t enter the area anymore,” he bewailed.

In 2012, the Chinese took control of Panatag (Scarborough) Shoal after a brief standoff with a Philippine Navy vessel whose crew had tried to arrest Chinese poachers.

Outnumbered and outgunned by the Chinese, the Filipinos were forced to release the poachers along with their illegal cargo of live baby sharks, giant clams and endangered corals. The Chinese have never left the shoal since then. 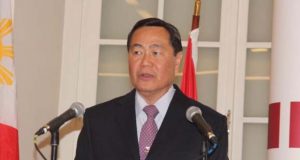