SHANGHAI (Reuters) – China has completed the construction of two lighthouses in the disputed South China Sea, the official Xinhua news agency reported, as tensions in the region mount over Beijing’s maritime ambitions.

A completion ceremony was held for the lighthouses on Cuateron Reef and Johnson South Reef in the Spratly islands, Xinhua said late on Friday. The United States and the Philippines have opposed the construction.

China claims most of the energy-rich South China Sea, through which $5 trillion (£3.3 trillion) in ship-borne trade passes every year, and the Philippines, Vietnam, Malaysia, Taiwan and Brunei have overlapping claims.

China said on Friday it would not stand for violations of its territorial waters in the name of freedom of navigation, as the United States considers sailing warships to waters inside the 12-nautical-mile zones around islands it has built in the Spratly chain.

Washington has signalled it does not recognise Beijing’s sovereignty over the several islands China has built on reefs in the Spratly archipelago and says the U.S. navy will continue to operate wherever international law allows.

The issue is central to increasingly tense relations between the United States and China, the world’s two largest economies.

Beijing has said construction in the region is to help maritime search and rescue, disaster relief, environmental protection and navigational security. It has also said it will continue to build other installations to better serve countries in the region and vessels navigating those waters. 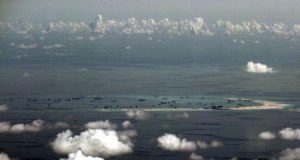