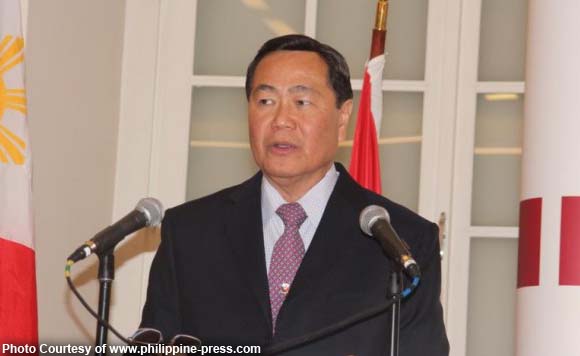 Supreme Court Justice Antonio Carpio on Thursday, Nov. 5, 2015, said a president who would think of splitting the West Philippine Sea into two and share it with China will surely be impeached.

In a forum on the maritime and territorial dispute, Carpio said it would be an impeachable offense to split the sea and go against the Constitution.

“Why don’t we just cooperate with China? If the bully goes to your house, and say, ‘get out,’ and you have the title of your house, but because he’s a bully and you’re a small guy, will you just tell him, ‘Okay, I’ll give you one half of the house?’ The UNCLOS grants us 200 nautical miles, the same with China,” Carpio said.

The Associate Justice was referring to the international law that governs maritime disputes and grants a country 200 nautical miles of exclusive economic zone.

“We have an agreement (under UNCLOS). China is saying we are entitled to 200 nautical miles but we’re claiming the rest of the South China Sea because of historic right. They cannot do that anymore… Fifty-fifty na lang? It would be unconstitutional. A person who would do that would be impeached,” he added.

It seems like a “patama” to Vice President Jejomar Binay, who remains the only presidential aspirant who espoused a “joint venture” with China to explore the oil and gas of the contested waters.

Binay has said he is open to opening bilateral talks and that a small country like the Philippines needs China’s capital.

Carpio said any such presidency which would withdraw the case before the International Arbitration Tribunal just because it wants to talk with China is a catastrophe.

“I think the case would be decided before the next president assumes office. In the event it would not be decided, and there’s a new president, the UNCLOS itself encourages parties to come to an amicable settlement even while the case is going on,” Carpio said.

“If a new president comes in and the case is still going on, there is nothing wrong with talking to China. What is wrong is if the case is withdrawn. It should not be withdrawn… If the president will withdraw the case because we’re willing to talk with China, that would be catastrophic,” he added.

Carpio also lauded the tribunal’s latest decision to take jurisdiction of the case, and that the arbitration court even ignored the ancient nine-dash line, China’s strongest evidence to show that it owns the waters within the said boundary based on historic rights.