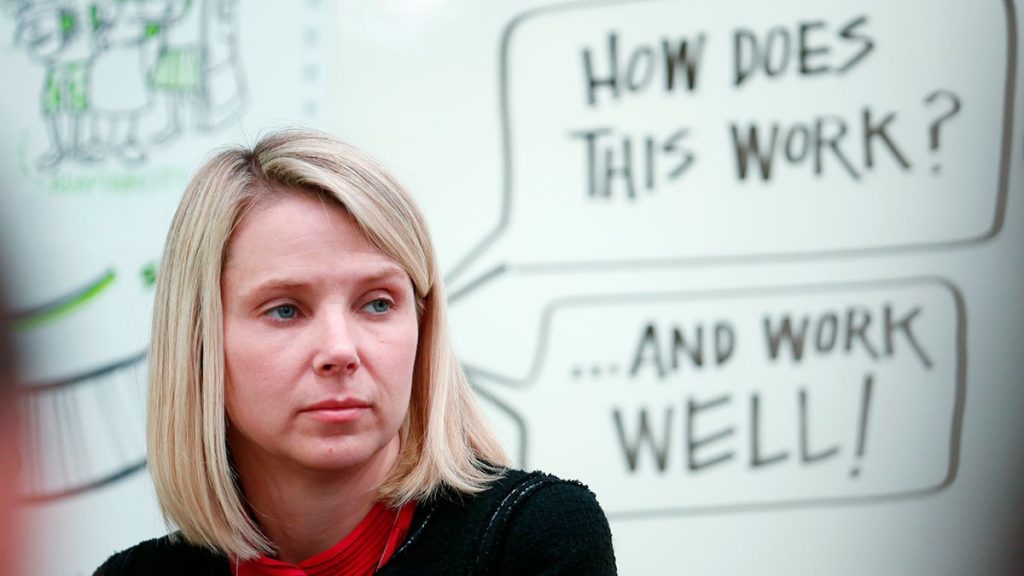 Yahoo was once the king of the Internet, a $125 billion behemoth as big in its time as Facebook or Google are today. Now it’s being sold to Verizon for comparative chump change.

On Monday morning, Yahoo announced the end of the long process to extricate itself from a mess of its own making with a sale of its core operating business to Verizon for $4.8 billion in cash. The transaction ends the independence of one of Silicon Valley’s most iconic pioneering companies. Yahoo’s seventh and final CEO, Marissa Mayer, will reportedly depart upon the deal’s conclusion with severence pay worth more than $50 million.

The sale will unite Yahoo with another fallen star, AOL, the first web portal Verizon bought last year for $4.4 billion. The United States’ largest wireless provider is betting nearly $10 billion that combining the two formerly dominant websites will give it an edge in mobile content and advertising technology it can leverage across its more than 140 million subscribers.

“Today’s announcement not only brings us an important step toward separating Yahoo’s operating business from our Asian asset equity stakes, it also presents exciting opportunities to accelerate Yahoo’s transformation,” Mayer wrote in a email announcing the news. “Among the many entities that showed interest in Yahoo, Verizon believed most in the immense value we’ve created, and in what a combination could bring our users, our advertisers, and our partners.”

But the biggest story today is how Yahoo squandered its massive head start and let each wave of new technology in search, social, and mobile pass it by. Yahoo remains largely the same company it was a decade ago — a portal that hundreds of millions of users rely on for everything from news and weather to key functions like email and games like fantasy football. As the attention of the world shifted to smartphone apps, Yahoo’s last advantage in the desktop world began to fade.
Recommended by Forbes

Yahoo began in 1994 as “Jerry’s Guide to the World Wide Web,” a list of websites curated by Stanford University students Jerry Yang and David Filo. It grew quickly as millions of Americans began turning on dial-up Internet connections and needed a home page that would direct them to all their essential destinations. In 1996 it went public and rode the dot-com bubble to epic heights, reaching a peak of $500 a share (or $125 a share in today’s post-split calculations) in January 2000.

Yet Yahoo missed the opportunity of a generation to convert its early lead and millions of users into more than just a portal. At the height of the bubble, it spent $4.5 billion to buy Geocities and $5.7 billion to buy Broadcast.com, but would later reportedly squander the chance to buy young versions of both Google and Facebook. Yahoo’s own search offering now holds only a fraction of the market and its eventual purchase of social network Tumblr hasn’t made up for the Facebook miss. (Yahoo wrote down Tumblr’s value for the second time last week.)

Over the last four years, Mayer, a former Google executive, tried to right Yahoo’s ship. But her tenure was marred by confused strategy and mismanagement. Revenue peaked in 2008, the year after the iPhone came out, and traffic has continued to fall as users find their attention drawn to younger, more relevant websites and apps.

The one thing that kept Yahoo afloat for this long is Jerry Yang’s risky $1 billion bet on Alibaba in 2005. That bought 40% in what would become China’s ecommerce king. Yahoo sold parts of that holding over time, but its current stake is still worth more than $30 billion at today’s prices.

However, the investment was so successful that it became worth far more than Yahoo’s flagging core business. In 2015, Yahoo’s management plotted a tax-free spin off of its Alibaba stake to unlock shareholder value, but scrapped the plan at the last minute when the IRS refused to grant its blessing. Since then, Yahoo has been evaluating “strategic alternatives” with a months-long auction process for its core business that has drawn constant headlines and speculation. The sale will not include the company’s stakes in Alibaba or Yahoo Japan.

Experts have long pegged Verizon as the frontrunner, but others put in bids. Billionaires Dan Gilbert and Warren Buffett backed one offer, as did the parent company of Yellow Pages, and private equity firm TPG. But in the final accounting, it would be Verizon that snagged Yahoo’s technology and web properties off the bargain bin, 22 years after inception.

It’s an ironic end. While the opening of the consumer web made the portal an early online superpower, now Yahoo will be eaten by a company that enables more users to access the Internet every day, from anywhere, than Yahoo’s founders ever could have dreamed when they first launched.