24 Feb – It was revealed that Alden Richards’ mini-series, “Ilustrado”, is set to compete in the New York Festivals’ World’s Best TV and Films Competition under the Mini-Series category.

According to GMA, the mini-series, which premiered in October last year, chronicles the early life of nationalist Jose Rizal as a teenager and his tragic first love that allegedly became the inspiration for the character Maria Clara in his novel “Noli Me Tangere”.

The drama is only one of GMA network’s nine entries that have been shortlisted by the festival.

Other Kapuso programmes include an episode of “I-Witness” entitled “Dorm 12”, which is a finalist under the Community Portraits category, and investigative news magazine show, “Reporter’s Notebook”, for an episode called “Hikahos sa Lungsod”, which is nominated in the Social Issues category.

The New York Festival’s World’s Best TV and Films competition recognises TV programs and films from over 50 nations. Winners will be announced at the gala, to be held on 19 April in Las Vegas. 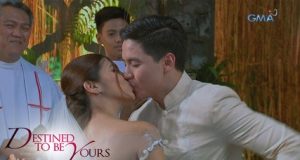 TrendingThisMinute Team - June 4, 2017
Disclaimer : All pictures contained herein are properties of their rightful owners, we just did a google search and posted these for entertainment purposes.