Despite Danding Cojuangco’s support, Grace Poe always reminds the public that she will never be beholden to Danding’s interests. With an image as clean as her mom’s Champion detergent, Poe’s supporters seemingly believe her. After all, her core platform is compassionate governance, right?

But let’s ask the question: just how connected is Grace Poe to Danding Cojuangco?

Before we go into the details, let me give you the key people and organizations in Danding’s circle:

San Miguel Corporation
For much of recent history, Danding Cojuangco lorded over San Miguel Corporation, owing to his controlling shares of the company, purchased using ill-gotten wealth from Coco Levy Funds [TP: Coco Levy Primer]. Over the past couple of decades, Danding and SMC have become synonymous. Danding is SMC’s chairman.

Now, it’s time to list down the people and the companies that connect SMC with Grace Poe.

Fourth, Poe enjoys the support of the Nationalist People’s Coalition, whose founder and chairman emeritus is Danding Cojuangco [Inquirer].

Seventh, Poe’s father Fernando Poe Jr had very close ties with SMC, being the chief endorser of San Miguel Pale Pilsen throughout his life [SMC]. Some would argue that this is a petty thing, pero hanapbuhay yan, malaking pera pinag-uusapan dito.

Fourteenth and most importantly, Poe herself owns SMC stocks per her 2014 SALN [GMANews].

The diagram below shows all these connections, which are so numerous that Thinking Pinoy almost ran out of space to squeeze in the connector lines.

Basically, we have shown that Danding and San Miguel Corporation are not just campaign donors to Grace Poe. Instead, Danding and SMC are so deeply embedded in her personal and professional life that’s it really hard to isolate her history from the plunderer Danding’s.

How can Grace Poe convince us that she won’t grant anyone any special favor, when it’s clear that her life revolves around Danding?

So now, are we still surprised about why she defends him? [TP: Grace Poe, ang pagtatakip] 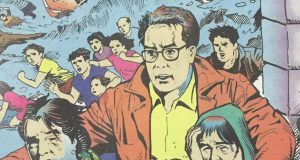 TrendingThisMinute Team - March 29, 2016
MANILA, March 29, 2016— An official of Caritas Philippines lashed out at a comic book that portrayed presidential candidate Mar Roxas as a “hero”...