The Philippines Genocide is the genocide history forgot, you will find in history books the Filipino-American War of 1899-1902 but they fail to mention the genocide carried out by the United States of America on the people of the Philippines.

I first came across references to the Philippines Genocide in 2009 and since then have spent a lot of time researching it. I have discussed it with many people, it seems people in the Philippines are not taught about the genocide and very few have even heard of it.

The fact that it is not taught and so few know about it did make me question if it really happened. So I dug much deeper and have come to the conclusion it did happen, but as the victors write the history books they tried to cover it up because it  was so horrific.

Figures do not add up

What brought me to the conclusion that it did happen is the figures in the history books which simply do not add up. The History books that were written by the victors claim somewhere between 200,000 to 300,000 died in that period, which is still a large number considering the population of the Philippines at the time was no more than 9 million.

E. Ahmed’s wrote “The Theory and Fallacies of Counter-Insurgency,” The Nation, August 2, 1971.“the bloodiest colonial war (in proportion to population) ever fought by a white power in Asia; it cost the lives of 3,000,000 Filipinos.”

Filipina historian the late Luzviminda Francisco carried out a thorough investigation of the Philippines Genocide and documented it, she arrived at the figure of 1.4 million Filipinos dead. The End of An Illusion (London, 1973). However, this only covered the period from 1899 to 1905 it does not cover the first 2 decades of U.S. colonial rule a time when the killing might have slowed but was still happening to keep the people in order, it also does not include the thousands of Filipino Muslims (Moros) that were brutally killed.

People will often ask why do Census figures not show a drop in population for that period?

There could be a few reasons for this, firstly I doubt even today population figures for the Philippines are correct as so many people live of the radar, imagine how difficult it would have been to calculate the population in the late 1890s and the early 1900s.

The methodologies used by the Spanish and the Americans were also very different.

You also have to ask if the U.S census figures showed a drop of 1.4 million or more would they publish this for the world to see?

I suspect however the U.S figures were no more than a guess based on the Spanish figures, as it was at a time of war and would have been almost impossible to collect the numbers. Or maybe the U.S did give the task of collecting the numbers but rather than going out into hostile communities that would put them in danger they made them up using the Spanish census as a guide.

In an article published in The Philadelphia Ledger November 1901 their Manila correspondent wrote “The present war is no bloodless, opera bouffe engagement; our men have been relentless, have killed to exterminate men, women, children, prisoners and captives, active insurgents and suspected people from lads of ten up, the idea prevailing that the Filipino as such was little better than a dog…

“Our soldiers have pumped salt water into men to make them talk, and have taken prisoners people who held up their hands and peacefully surrendered, and an hour later, without an atom of evidence to show that they were even insurrectos, stood them on a bridge and shot them down one by one, to drop into the water below and float down, as examples to those who found their bullet-loaded corpses.”

Major Littletown Waller a U.S. Marine that was accused of shooting 11 unarmed Filipinos on Samar. Another Marine officer described his testimony.

“The major said that General Smith instructed him to kill and burn, and said that the more he killed and burned the better pleased he would be; that it was no time to take prisoners, and that he was to make Samar a howling wilderness. Major Waller asked General Smith to define the age limit for killing, and he replied “everyone over ten.”

Filipino did not stand a chance against the superior and overwhelming firepower of the American troops. In the first battle Admiral Dewey was firing 500 pound shells as he steamed along the River Pasig. The bodies of dead Filipinos was so high U.S. troops used them for a defensive wall.

“…I have seen that we do not intend to free, but to subjugate the people of the philippines. we have gone to conquer, not to redeem… and so i am an anti-imperialist. i am opposed to having the [american] eagle put its talons on any other land.”

“We have pacified some thousands of the islanders and buried them; destroyed their fields; burned their villages, and turned their widows and orphans out-of-doors; furnished heartbreak by exile to some dozens of disagreeable patriots; subjugated the remaining ten millions by Benevolent Assimilation, which is the pious new name of the musket; we have acquired property in the three hundred concubines and other slaves of our business partner, the Sultan of Sulu, and hoisted our protecting flag over that swag. And so, by these providences of god — and the phrase is the government’s, not mine — we are a World Power.” — Mark Twain

Mark Twain also spoke of the almost universal racism of the white American troops and politicians he called them shameless. He was deeply disturbed by the sadistic war crimes that were committed by the American troops. He suggested that the Stars and stripes on the American flag should be replaced by a skull and cross bone.

Was it American policy to kill as many Filipinos as possible? Brigadier General J. Franklin Bell wrote “With a very few exceptions, practically the entire population has been hostile to us at heart,” so there is no doubt the Americans saw every Filipino as the enemy.

The USA carried out a scorched earth campaign in burning and destroying villages, they also tuned villages into concentration camps where they burnt the land around them and built watch towers that looked over the free-fire zones, anyone trying to leave the village was shot. They called these concentration camps reconcentrados.

The reconcentrados (concentration camps) were full of disease which caused a very high death rate the death rate in some camps was as high as 20%. One camp was 2 miles long by 1 mile wide and was the prison for 8,000 filipinos. Men were often rounded up to be questioned using torture if they gave the Americans the information they wanted or not did not matter as they were still shot.

A soldier from New York wrote

“The town of Titatia was surrendered to us a few days ago, and two companies occupy the same. Last night one of our boys was found shot and his stomach cut open. Immediately orders were received from General Wheaton to burn the town and kill every native in sight; which was done to a finish. About 1,000 men, women and children were reported killed. I am probably growing hard-hearted, for I am in my glory when I can sight my gun on some dark skin and pull the trigger”

Corporal Sam Gillis wrote “We make everyone get into his house by seven p.m., and we only tell a man once. If he refuses we shoot him. We killed over 300 natives the first night. They tried to set the town on fire. If they fire a shot from the house we burn the house down and every house near it, and shoot the natives, so they are pretty quiet in town now.”

A British eye witness in the Philippines said:

“This is not war; it is simply massacre and murderous butchery.”

Why the Philippines Genocide happened

It all happened because of a prayer to god.

President McKinley was in the Whitehouse praying when he claimed it came to him that he could not give the Philippines back to Spain as that would look cowardly.

McKinley said he did not want the Philippines. But then one night in the White House, when he was down on his knees praying to God, it came to him:

That we could not give them back to Spain – that would be cowardly.

He could not let France and Germany have the Philippines as that would be bad for business.

He could not let the Filipinos rule themselves as he considered them incapable.

So he decided America should take the whole Philippines rather than just Manila which is all they had at the time, educate the people and Christianise them, something the Spanish had already done to many of the people.

While we can not be sure of the figure of 3 million that some historians claim We can be pretty sure from research that the figure of 1.4 million killed in the Philippines Genocide between 1899 to 1905 is correct, it is unlikely the killings just suddenly stopped, the reports from the time show how racist towards the Filipinos many of the American troops had become, they also show that many of the troops had come to enjoy the killing. Could you get men that had become brutal killers to suddenly stop killing? It is very unlikely, you only have to look at wars today that are nowhere near as brutal and in an age where people are more educated to realise how war affects some people. We also know the fighting with the Moros carried on.

So did the numbers killed reach 3 million? We will never know but it probably did between 1899 to 1942 when the Japanese arrived. 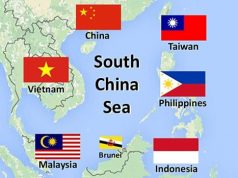 US Navy to China: We’re staying in South China Sea