Vice presidential candidate Leni Robredo has hit her rival, Ferdinand “Bongbong” Marcos, as she claimed Philippines will be the world’s laughingstock if Marcos gets elected.

“Talagang naniniwala ako na if he will be elected to office, lalo na for something as high as the vice-presidency, parang laughingstock of the world tayo,” she said on Headstart on Tuesday.

“Ngayon, parang pinabayaan natin na in the previous years, they’re really back into power,” she added.

She maintained that the Marcoses should have been permanently barred from seeking public office since the EDSA Revolution.

She attributed Marcos’ lead in the surveys to his machineries, which she said, have been laid out for many years now.

“He did not start at the start of the campaign period; the brainwashing really started many years back,” Robredo said.

However, she also admitted a small fault in it, saying “we failed in trying to instill in hearts and minds of many people the real truth about Martial Law, the real truth of why EDSA happened.”

Marcos has been staunchly defending himself against critics by saying he should not be made liable for the sins of his father.

Although Robredo said it is true that the son must not pay for his father’s sins, the younger Marcos benefited from his father’s wrongdoings.

She also agreed with Marcos’ closing statement in the debate that the country needs a leader that unites and looks forward, not backward; but said doors cannot be closed yet because justice hasn’t been served.

“We were off to a good start before—naantala yung lahat because of the abuses during the Marcos years. Hindi ‘to pwede na kalimutan na lang. Hindi pa naseserve yung justice sa lahat ng naging biktima ng Martial Law. We can’t close doors yet.”

Robredo first took a jab at Marcos publicly in a Go Negosyo forum, where she said she was presented an “opportunity to expose the truth.”

Because EDSA was a pivotal event in her life, she said she takes “offense that many people try to relegate the Marcos story [to] the background.”

Robredo shared that her plans of entering law school right after finishing her undergraduate degree in the University of the Philippines was derailed when she had a “political awakening” after Ninoy Aquino was shot dead.

She took a gap year and worked in the government where, she recalled, she met her late husband, Jesse Robredo. This chain of events, she said, pushed her into public service. 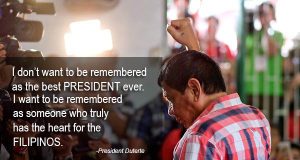 TrendingThisMinute Team - July 31, 2016
HERE ARE 20 THINGS THE DUTERTE ADMINISTRATION HAS DONE IN 8 DAYS Duterte’s first order to all agencies was to reduce the amount of time...