Transactions amounting to P2.407 billion and involving 17 accounts of Duterte in three banks (two in Metro Manila and one in Davao) were recorded over a nine-year period, documents provided by Sen. Antonio Trillanes IV to the Inquirer showed.

From 2006 to 2015, Duterte held seven joint accounts with his daughter Sara at the Bank of the Philippine Islands (BPI) branch on Julia Vargas Avenue  in Pasig City, nine joint accounts at the BPI Edsa Greenhills branch and one joint account at Banco de Oro Unibank-1 in Davao City.

The number of deposits and transfers in the three banks totaled 71, of which 23 were interbank transfers and 48 through credit memos.

The interbank transfers amounted to a total of P715.9 million, while those done through credit memos reached P1.69 billion.

The records showed that 48 deposits totaling P1.7 billion, including a deposit of $1.9 million, were recorded at the BPI Julia Vargas and Edsa Greenhills branches.

In another instance, four transfers of the same amount (P41.72 million) were made in just one day at BPI Julia Vargas.

On March 28, 2014, Duterte’s 69th birthday, seven transactions amounting to P193.71 million (not P197 million as earlier reported) were credited to his account at BPI Julia Vargas.

That year, the BPI Julia Vargas accounts contained P227.41 million (not P211 million as earlier reported) but was not included in Duterte’s statements of assets, liabilities and net worth (SALN) submitted to the Office of the Ombudsman for Mindanao on April 30, 2015.

All the accounts of Duterte and daughter Sara, except for the BDO Unibank, showed Ecoland Subdivision in Davao City and P. Guevarra Street in San Juan City in Metro Manila as their home addresses.

As mayor, Duterte receives a monthly pay of P78,946 (Salary Grade 30) under the government salary standardization law prescribed by the Civil Service Commission.

Failure to declare an asset is a ground for an official’s dismissal from government service.

Duterte earlier denied the existence of the BPI Julia Vargas accounts, but admitted on Thursday that he had two accounts in the bank branch. With reports from Kate Pedroso and Ana Roa, Inquirer Research 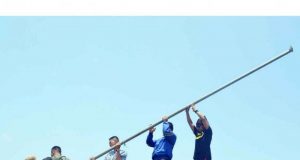 TrendingThisMinute Team - May 3, 2016
ITBAYAT, Batanes – The Armed Forces of the Philippines (AFP) yesterday hoisted the Philippine flag in one of the five unoccupied islets here to...