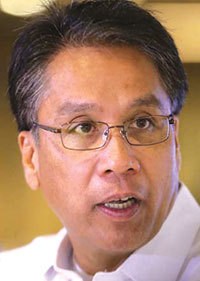 Team Daang Matuwid spokesman, Akbayan Rep. Barry Gutierrez, along with its standard bearer Manuel “Mar” Roxas has been demanding Vice President Jejomar “Jojo” Binay to explain the billions of pesos allegedly obtained for the Makati Buildings I and II in kickbacks.

His political foes, including Rodrigo Duterte and his tag along VP bet, Alan Cayateno, who have pounced on the outdated and false report of the Anti-Money Laundering Council (AMLC) as reported in the Inquirer for two days running, alleging that the Binay funds were transferred to alleged dummies and even used Philrem, the same remittance firm used in the money laundering scam in the the Bangladesh central bank cyber heist of $81 million fund transfers to the RCBC. (See banner story.)

But the Liberal Party spokesman and Binay’s other political foes, have not said anything about the Commission on Audit (CoA) on the Department of Interior and Local Government (DILG) during Roxas’ term.

“This is an indication that the DILG failed to monitor the implementation of the projects,” the report said.
“The Receivables accounts accumulated to a huge amount of P7.040 billion because management failed to monitor the liquidations of the fund transfers and submission of the corresponding financial reports contrary to CoA Circular No. 94-013,” CoA further noted.

Aside from the unliquidated fund transfers, some P17 million in cash advances also remains unliquidated, the same report revealed.

“Mar Roxas’ track record as Secretary of the Interior and Secretary of Transportation and Communication speaks volumes of his executive abilities,” UNA spokesman Mon Ilagan said.

“Even in projects where he and the DILG have no technical expertise, DILG, they get the projects. Now, they have difficulty in monitoring and liquidating,” he said.

Ilagan said a Binay presidency will focus on the proper implementation and monitoring of government projects and programs.

“When investors see that projects are properly implemented, this will help attract more capital, generate more jobs, and provide additional revenues to enable the state to take better care of our poor and marginalized countrymen,” he said.

“The Vice President has vowed to appoint people with proven track record and experience to cabinet positions so that they can hit the ground running and there will be no more learning curve,” he added.

CoA said its Circular No. 94-013 provides that within 10 days after the end of each month/end of the agreed period for the Project, the Implementing Agency (IA) shall submit the Report of Checks Issued (RCI) and the Report of Disbursement (RD) to report the utilization of the funds approved by the Head of IA.

“The Source Agency (SA) shall draw a JEV (Journal Entry Voucher) to take up the reports and the IA shall return to the SA any unused balance upon completion of the project,” the report added.

CoA also noted in its 2014 audit report that “cash advances granted to officers and employees totaling ?17.097 million were not liquidated within the prescribed period, contrary to CoA Circular Nos. 2012-001 and 2012-004.”
Of the P17 million, P5.54 million was from the DILG’s Central Office, which also houses the Office of the Secretary.
“We recommended and Management agreed to require the immediate liquidation and settlement of all the cash advances and initiate the filing of criminal and administrative charges against the Accountable Officers (AOs) with unliquidated cash advances granted before December 31, 2011 pursuant to CoA Circular No. 2012-004,” the CoA auditors said in the report.

The unliquidated cash advances of Roxas’ DILG in 2013 represented 10.85 percent of the total P10.14 billion unliquidated that year.