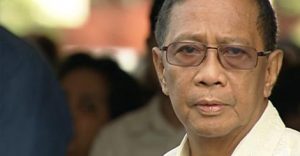 Malaysia summoned the Manila envoy in Kuala Lumpur over comments made by the Philippines presidential frontrunner to pursue a claim over the state of Sabah, the Philippines’ foreign department said Thursday.

Jejomar Binay, vice president and the leading contender in upcoming May elections, was quoted by Manila newspapers last week as saying he would pursue a claim over the area in the north of Borneo island.

About 200 Filipino followers of a self-declared heir of the Philippine sultanate landed on Sabah in February 2013 to stake their claim on the resource-rich state, resulting in clashes with Malaysian security forces, leaving over 60 dead.

Aquino condemned the incursion at the time and the issue has since been put on the back burner by the two Asian neighbors.

“We will pursue our claim to Sabah. Why would we give up something that rightfully belongs to us?” Binay was quoted as telling reporters on the campaign trail.

“The charge d’affaires had to explain the Philippine position” after being summoned by the Malaysian foreign ministry, Philippine foreign affairs spokesman Charles Jose told AFP.

He said the envoy explained that Binay, who has broken with the administration of Philippine President Benigno Aquino, was not under the government’s control even though he remains vice president until his six-year term ends on June 30.

The Sultan of the Sulu once ruled over islands that are now parts of the southern Philippines, as well as Sabah. The sultanate leased northern Borneo to Europeans in the 1870s.

While the sultanate’s authority gradually faded, its heirs continued to receive lease payments for Sabah, even after the former British colony became part of the federation of Malaysia in 1963.

While the Philippines has never completely dropped the claim to Sabah, it has largely declined to raise it. However some Filipino politicians occasionally drum up the issue in the hopes of gaining popular support.