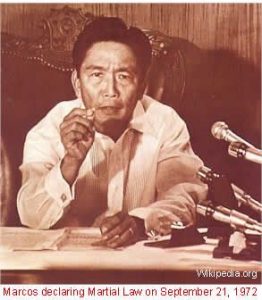 Hundreds of professors of the Jesuit-run Ateneo de Manila University on Wednesday expressed their strong opposition to Sen. Ferdinand “Bongbong” Marcos Jr.’s “willful distortion of history,” scoring the vice presidential aspirant’s continuous denial of the abuses committed during the regime of his late father and namesake.

The Ateneo faculty members were particularly reacting to Marcos’ statement that the assessment of the late dictator’s leadership must be left to teachers and students of history.

“We, the undersigned members of the Ateneo de Manila community, vehemently oppose and condemn the ongoing willful distortion of our history,” 412 Ateneo members said in a joint statement. “We deplore the shameless refusal to acknowledge the crimes of the Martial Law regime. We reject the revision of history, disturbing vision of the future, and shallow call for ‘unity’ being presented by Marcos Jr. and like-minded candidates in the 2016 elections.”

Noting that the Marcos patriarch was mainly concerned with holding on to power, the professors debunked claims by loyalists that the Philippine economy was at its peak during the late dictator’s rule.

“We believe that the Marcos regime’s economics of debt-driven growth was disastrous for the Philippines. The regime was not interested in inclusive development, long-term state-building, or genuine social transformation of the country, despite its ‘New Society’ rhetoric. Instead, Marcos was mainly concerned with perpetuating his personal hold on power by favoring family members, friends, and other cronies,” the statement read.

“Thus, Marcos simply created new elites or ‘oligarchs’ rather than abolish them — supposedly one of his main justifications for declaring martial law. Those who dared challenge the regime’s monopoly on power, whether politicians, business people, political activists, organized labor, peasants or urban poor, Church workers, students — young or old, rich or poor — were intimidated, imprisoned, kidnapped, tortured or summarily executed,” it added.

The Ateneo members also urged the government to “relentlessly pursue and reclaim” the Marcos family’s ill-gotten wealth, give “justice and compensation in full” to martial law victims and their families, and reject calls to give the late dictator a hero’s burial at the Libingan ng mga Bayani.

“We refuse to forget the atrocities committed by the Marcos regime, and we renew our demand that the perpetrators of these crimes be brought to justice… Any call for unity, most especially from the heirs of the Marcos regime which bitterly divided the country, will be empty and meaningless unless truth and justice are upheld,” they said.

Calling the Marcos years as “one of the darkest periods of Philippine history,” the professors affirmed their commitment “always to teach the truth” and underscored the academe’s role in educating the youth, particularly those who did not witness martial rule, by rejecting any attempt to distort the real account of events.

“We reaffirm our responsibility as teachers and professionals to keep the spirit of EDSA 1986 alive by imparting to the young that the structures, actions and ideas — including the many lies — that allowed the Marcos dictatorship to impose and perpetuate itself, should be eliminated and never again be allowed to flourish. At the same time, we will work to bring to fruition the dream of EDSA for a more just and democratic society,” the statement read.

“We condemn, in the strongest possible terms, attempts by some individuals and particularly public figures, to whitewash the Marcos regime’s wanton violation of human rights and to distort its political-economic record,” it added.

Rejecting claims that only a dictatorship and not a democracy was capable of bringing progress to the Philippines, the professors said the solution to prevalent problems like poverty and injustice was to “harness the full democratic capacity of our people and institutions” and to “deepen our democratic practices.”

“It has become a glib talking point of the Marcos revisionists and loyalists to say that the People Power Revolution has ‘failed.’ We vehemently disagree. It was truly a genuine popular uprising and triumph against dictatorship. The revolution, however, is unfinished. The fullness of democratization, especially the creation of a social order which respects the dignity of all Filipinos, has yet to be achieved,” the Ateneo members said.

“It is our responsibility now as a people to continue and complete this unfinished struggle. We must start with the truth. Ginoong Marcos, mga pinunong tapat sa katotohanan ng kasaysayan ang siyang kailangan ng taong bayan ngayon!” they added. JE