If you’re anything like us, one of your greatest sources of anxiety is the little bar in the upper right-hand corner of your phone’s screen. As long as it’s white, we’re good. The second that battery saver mode goes on, we’ve got a major problem. But thanks to researchers from the University of Washington, that issue might soon be a thing of the past.

So what does it mean to have a battery-free cellphone? It means that this little device, which looks like little more than a keypad stripped down to a circuit board, might be the future of communication technology. Without a battery, it powers itself off of ambient energy. It literally sucks electricity right out of the air. No more low battery warnings, no more heavy external battery packs, no more sitting on the floor of the airport because you found one of the only open outlets tucked in a corner.

There is a slight catch. This phone doesn’t even have a screen. Looking at it, you’d probably guess it was an important part of a bigger device, not a working phone itself. So it’s more a proof of concept than anything else — it’s not rolling off Apple’s assembly lines any time soon. But it is capable of all of the basic functions of any phone. It has already been used to make phone calls (over Skype, even) and, provided you don’t mind sounding like you’re speaking over a fast food intercom, it could be used as a reliable home phone.

So how exactly do you make a phone that doesn’t need any direct power source? Step one is making sure the device doesn’t need a lot of juice. This one takes 3.5 microwatts — your average smartphone takes about a million times more.

Next is finding a way for the phone to harvest energy from its surroundings. This prototype device solves the problem in two ways: it uses solar cells to get power from the light, and it picks up extra energy from radio signals from an emitter located about 31 feet away. Unless we put radio emitters all over the planet, this isn’t going to be very portable. It almost recalls Tesla’s tower of free energy, made a reality. 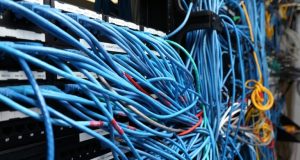 TrendingThisMinute Team - July 25, 2017
A surge in computer hacking has led to the breach of more than six billion records so far this year, topping the total for...