The Philippines’ biggest phone and internet provider, PLDT, is preparing to take Telstra and its would-be partner San Miguel to court in an effort to strip the companies of their most valuable spectrum assets.

Telstra is in the final stages of negotiating a multibillion-dollar joint venture with San Miguel to build a new mobile phone network in the Philippines, a relatively risky move in one of Asia’s most hotly contested mobile markets. San Miguel president Ramon Ang wants the service to kick off from the first quarter of 2016.

Both Globe and PLDT have asked the regulator to reassign part of SM’s 7000MHz holding in a more equitable way.

Telstra’s biggest advantage is San Miguel’s 90 per cent holding of 700MHz spectrum across the country. Spectrum is the electronic airspace that all broadcast technologies rely on and the 700MHz frequency band is the best at penetrating buildings and travelling long distances.

But both of Telstra’s would-be rivals, Globe Telecom and Philippine Long Distance Telephone Company (PLDT), are demanding the local regulator force San Miguel to share its spectrum – which analysts warn would greatly decrease the potential advantages and profitability of the new ventures.

PLDT head of Regulatory Affairs Ray Espinosa told Fairfax Media in an exclusive interview the company would begin lobbying Philippines President Benigno Aquino III directly this month. He added that its external legal team was preparing to launch legal action against the regulators, San Miguel and any of its partners unless the spectrum was shared.

“The 700MHz as it is assigned today has been issued with the assumption that it will be used for broadcast purposes only [and] the companies that hold it cannot legally use it for mobile communications purposes,” he said. “We are prepared to take vigorous action judicially if that’s necessary for us to get our fair share of the frequency … and that could mean bringing the case before our judicial courts. That would be against the regulators and the holders of the frequency.

“We will also bring it to the attention of the office of the President to emphasise how important this is … before the end of the year if not the early part of January.”

Goldman Sachs analyst Raymond Tong this month told clients in a note that San Miguel being stripped of its spectrum was a key risk to the project.

“Both Globe and PLDT have asked the regulator to reassign part of SM’s 7000MHz holding in a more equitable way,” he said. “This would significantly reduce San Miguel’s competitive advantage.”

The companies dominate the Philippines’ mobile market and are trying to ratchet up the pressure against Telstra’s entry, which analysts say would result in lower prices and profits.

Various analysts forecast the cost of building the network could range from $US2 billion ($2.79 billion) to $US3.5 billion ($5 billion) over four years and some believe there is a solid chance of cost overruns and delays.

But there are doubts about  how successful PLDT and Globe’s bid will be. Their legal threats and increased lobbying come after the National Telecommunications Commission’s regulatory division head Edgardo Cabarios told local media it was unlikely to strip San Miguel of its 700MHz spectrum because the company was meeting its obligations – comments that Mr Espinosa described as “unfortunate and errant”.

Nomura research analyst Sachin Gupta said Telstra could pull off a solid win in the Philippines after a fact finding mission to the country.

“In the event the [spectrum] decision goes against the existing telcos or even SMC, this can be appealed in various courts and judicial systems and be dragged on,” he said. “Even during the appeal process, SMC can still continue to use the spectrum, we understand.”

Telstra chief executive Andy Penn told investors earlier this year he would invest up to $US1 billion for a 40 per cent stake in the joint venture on top of any bank loans needed to fund construction. 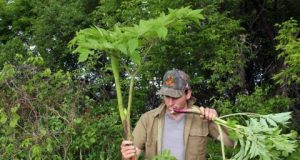 Researchers Have Found That Plants Know They Are Being Eaten

TrendingThisMinute Team - August 3, 2017
Vegetarians and vegans pay heed: New research shows plants know when they're being eaten. And they don't like it. That plants possess an intelligence is not new...