After some initial delay, several of the biggest names and competitors in the technology industry are now gearing up to stand firmly behind Apple in its fight with the FBI.

Google, Facebook and Twitter are planning to file legal briefs in court to support Apple in the coming days, individuals close to each company confirmed to Mashable on Thursday.

Sources close to the company suggested the legal filings are still in the works.

One industry rep characterized it to Mashable as a “joint submission” on behalf of the companies.

Microsoft’s chief legal counsel informed Congress earlier in the day that his company will file an amicus brief to support Apple “next week.”

Amazon, mostly silent on the issue to date, is also reportedly joining the rush to Apple’s defense, according to a report from BuzzFeed.Apple is currently locked in a controversial battle to avoid building a custom tool that would help the FBI break into the iPhone 5c belonging to one of the gunmen behind last year’s mass shooting in San Bernardino.

Tim Cook, the CEO of Apple, has repeatedly argued that the case could set a “dangerous” precedent that undermines the privacy and security of millions of consumers around the world.

The technology industry was slow at first in its response to the high-profile legal dispute — and a bit muddled in that response.

The CEO of Google, for example, put out a series of carefully worded tweets acknowledging the importance of Apple’s fight, while stopping short of a full endorsement.

4/5 But that’s wholly different than requiring companies to enable hacking of customer devices & data. Could be a troubling precedent

Bill Gates and Mark Zuckerberg, the founders of Microsoft and Facebook, respectively, released waffling statements of their own, while Microsoft proper chose to let an independent advocacy group speak on its behalf.

The execs and their companies were thought to be hampered by lucrative sales relationships with various government bureaus, looming legal battles of their own and broader concerns about firmly divided public opinion.

The pending amicus brief — or briefs — from the five influential companies send a clear message, however, that the giants of the tech industry now stand together to defend the principle of privacy — even as critics worry about the impact Apple’s decision could have on law enforcement’s ability to protect citizens.

“We at Microsoft support Apple, and we’ll be filing an amicus brief to support Apple’s position in court next week,” Brad Smith, president and chief legal counsel at Microsoft, said in an appearance before Congress on Thursday.

“We… agree wholeheartedly with Apple that the right place to bring this discussion is here, in the House of Representatives and the Senate, so the people who are elected by the people can make these decisions.” 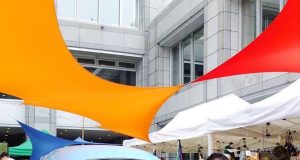