MANILA, Philippines – A medical doctor recently went viral after also passing the Bar Exams and becoming a lawyer, mostly because the feat is difficult to do. After all, the passing rates for the Bar Exams and the Physician Board Exams are low; yet this young woman was able to pass both!

In a post that has gone viral on Facebook, Jj Dela Peña Polido shared a photo of herself with some law books on the table and a stethoscope around her neck.

“TO GOD BE ALL THE GLORY!

While some did not immediately understand what she meant with the simple post, it was soon clear to them that she had just announced her new title of “Attorney” after passing the Bar Exams she took in November 2018.

Achieving Her Own Dream

The new lawyer shared that being a doctor was not her first choice, but actually her dad’s dream for her.

“Growing up kasi my father would always say na ‘Ito ung anak ko na magiging doctor.’ So it was his dream for me na eventually I came to love also,” she told the Inquirer.

What she really wanted was to be a lawyer, but she followed her dad’s wishes for her to become a doctor. After graduating from medicine at the University of Santo Tomas in 2010, Polido practiced her profession but was eventually drawn to her first love, Law.

“Kasi wala akong specialty. And yung dream ko to become a lawyer andun pa din. So I said, why not?” she shared.

So, without leaving the medical profession, Polido began to pursue her dream by enrolling at Arellano University School of Law.

At first, she tried to juggle being a teacher for medical technology students at Trinity University of Asia for 2 years, but she had to quit mentoring the students on her third year in Law School as the subjects became more challenging.

She graduated from Law School in 2018 and took the Bar Exams in November while 7 months pregnant. Not sure if she passed at all, she chose to stay at home and spend time with her two kids, 7 years old and 4 months old, on May 3 when the Supreme Court released the exam results.

It was only after she was able to confirm that she passed the Bar Exam did she go to the Supreme Court in Manila to celebrate with the other passers and have her photo taken in front of the LED board with her name on the screen.

Now that she’s a lawyer, many were curious whether she’d focus more on this new profession than in being a doctor. But Polido was sure about one thing: she’d do her best to practice both! 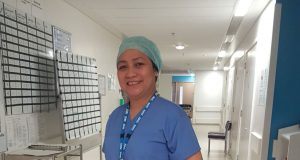 TrendingThisMinute Team - March 4, 2019
LONDON – A Filipina nurse here is set to receive a British royal citation for her community work, including her contribution to the response...