Your favourite staple just got healthier.

Rice is a mainstay of dozens of different cuisines around the world, and pretty much the fuel that keeps uni students alive (alongside instant noodles). But although the versatile grain is cheap and easy to cook, there’s one big issue with it – it’s not that great for you. In fact, one cup of cooked rice contains around 240 starchy calories that can be quickly converted into fat if they’re not burnt off.

But researchers in Sri Lanka have discovered a new, simple way of cooking the grain that dramatically cuts its calories by as much as 50 percent, and also offers some other important health benefits. And we’re never going to cook rice any other way again.

All you need to do is get a pot of water boiling, but before adding your raw rice, you add coconut oil – about 3 percent of the weight of the rice you’re going to add. So that’s roughly a teaspoon for half a cup of rice, explains Sudhair James, an undergraduate chemistry student from the College of Chemical Sciences in Sri Lanka, who led the research with his supervisor. He presented the work at the National Meeting and Exposition of the American Chemical Society on Monday.

“After it was ready, we let it cool in the refrigerator for about 12 hours. That’s it,” James told Roberto A. Ferdman from The Washington Post. To eat it, you simply pop it in the microwave and, voila, you have a “fluffy white rice” that’s significantly better for you.

Simple, right? But the process actually involves some pretty fascinating food chemistry. At the heart of the technique is the fact that not all starches are created equal.

There are two main types – digestible starches, which our bodies quickly turn into glucose and store as fat if we don’t burn it up; and resistant starches, which aren’t broken down into glucose in the stomach, so they have a lower calorie content. They instead pass through to the large intestine, where they act more like a dietary fibre and can provide all kinds of useful gut benefits.

Although a lot of starchy foods, such as potatoes and rice, start out containing a lot of resistant starches, depending on how we cook them, they often end up chemically changing before we eat them so that they’re mostly digestible starches.

Researchers had previously noted that, strangely enough, fried rice and pilaf style rice both seem to have more resistant starch than the more commonly prepared steamed rice. And a study last year also showed that letting pasta cool down before reheating and eating it greatly increased the content of resistant starch. So James and his supervisor Pushparajah Thavarajah wanted to investigate further.

They tested eight different ways of cooking rice on 38 different types of the grain found in Sri Lanka, and they discovered that by adding a fat such as coconut oil before cooking, and then immediately cooling the rice, they could change the starch composition of the end result so that it contained more resistant starch.

The oil works by interacting with the starch molecules and changing its architecture. “Cooling for 12 hours will lead to formation of hydrogen bonds between the amylose molecules outside the rice grains which also turns it into a resistant starch,” explained James in a press release. And he notes that heating the rice back up afterwards doesn’t change the resistant starch levels.

So far the duo has only measured the specific chemical outcomes in the variety of rice that initially had the worst starch content, but they found that they were able to reduce the amount of digestible starch 15 fold. This was also associated with a 10 to 15 percent reduction in calorie content.

James and Thavarajah will now begin testing the process on the naturally best strain of rice, Suduru Samba, which they believe will result in a 50 to 60 percent drop in calories. They’re also experimenting with using other types of lipids, such as sunflower oil.

This new cooking technique could lead to new pre-packed rice that’s already been cooked in fat and cooled, and is ready to microwave with dramatically less calories than current products.

And, even more importantly, the team now believe that the same technique could be used to make other starchy foods that we love more healthy. “It’s about more than rice,” Thavarajah told Ferdman. “I mean, can we do the same thing for bread? That’s the real question here.”

Not to discount your amazing work, team, but I think the real question here is can we do the same thing for potatoes? Because if we can somehow create fries with half the calories, I’m pretty sure I’ll be set for life. 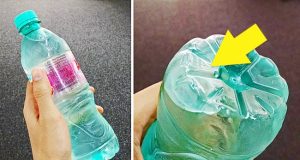 What you need to check when you buy bottled water

TrendingThisMinute Team - February 5, 2016
What do you know about the risks of buying different kinds of plastic water bottles? The chances are no one’s ever told you all...