For the past half century, cholesterol has been touted as a grave health hazard, and dietary fat and cholesterol have been portrayed as being among the “deadliest” foods you could possibly eat.

This may finally change, as limitations for cholesterol will likely be removed from the 2015 edition of Dietary Guidelines for Americans. It’s about time really, as 60 years’ worth of research has utterly failed to demonstrate a correlation between high cholesterol and heart disease.

Not only does undamaged natural cholesterol not cause heart disease, it is actually one of the most important molecules in your body; indispensable for the building of cells and for producing stress and sex hormones, as well as vitamin D.

Cholesterol is also important for brain health, and helps with the formation of your memories. Low levels of HDL cholesterol have been linked to memory loss and Alzheimer’s disease, and may also increase your risk of depression, stroke, violent behavior, and even suicide.

And, according to a recent report in the Washington Post,3 an insider claims the new stance on cholesterol will remain in the final report. As noted by medical journalist Larry Husten:4
“The proposed change reflects a major shift in the scientific view of cholesterol that has taken place in recent years.

Although serum cholesterol is still considered an important risk factor, cholesterol consumed in food is now thought to play a relatively insignificant role in determining blood levels of cholesterol.”
However, if you process saturated fat or cholesterol and heat it by frying, then you create very dangerous products that will clearly increase your risk of cardiovascular disease. So this new information does not give you free license to eat any type of cholesterol. Remember, trans fats are worse than sugar for your health.

Guidelines on Fat and Cholesterol Should Never Have Been Made

Steve Nissen, chairman of cardiovascular medicine at the Cleveland Clinic, told USA Today:5 “It’s the right decision. We got the dietary guidelines wrong. They’ve been wrong for decades.” This message was echoed in Time Magazine, which recently reported that:
“[I]n the latest review6 of studies that investigated the link between dietary fat and causes of death, researchers say the guidelines got it all wrong. In fact, recommendations to reduce the amount of fat we eat every day should never have been made.”
Low-fat diets saw a real upswing in 1977, but according to research published in the Open Heart journal,7 led by Zoe Harcombe, PhD, there was no scientific basis for the recommendations to cut fat from our diet in the first place.

What’s worse, the processed food industry replaced fat with large amounts of sugar, While Dr. Harcombe shies away from making any recommendation about how much dietary fat might be ideal, she suggests that the take-home message here is to simply “eat real food.”

I have to say, it’s refreshing to finally see that message being repeated in the mainstream media. As reported by Time Magazine:8
“The less adulterated and processed your diet is, the more nutrients and healthy fats, proteins and carbohydrates your body will get, and the less you’ll have to worry about meeting specific guidelines or advice that may or may not be based on a solid body of evidence.”

The low-fat craze led to an avalanche of new processed food products, promising to benefit both your waistline and your heart. Alas, nothing could have been further from the truth.

When fat was removed, sugar was added in, and this has led to a massive increase in obesity, diabetes, heart disease, and non-alcoholic fatty liver disease. As it turns out, your body metabolizes fructose in the same way it metabolizes ethanol, creating the same toxic effects.

Unlike glucose, which can be used by virtually every cell in your body, fructose can only be metabolized by your liver, because your liver is the only organ that has the transporter for it.

Since nearly all fructose gets shuttled to your liver, and, if you eat a typical Western-style diet, you consume high amounts of it, fructose ends up taxing and damaging your liver in the same way alcohol and other toxins do.

In fact, when you compare the health outcomes of fructose versus alcohol consumption, you see the diseases they cause are virtually identical:

Dr. Robert Lustig, Professor of Pediatrics in the Division of Endocrinology at the University of California, has been a pioneer in decoding sugar metabolism and sounding the alarm on processed fructose in particular.

In one of his papers,9 published in the Journal of the Academy of Nutrition and Dietetics in 2010, Dr. Lustig describes three similarities between fructose and its fermentation byproduct, ethanol (alcohol):

As recently reported in Scientific American,10 non-alcoholic fatty liver disease11 (NAFLD) now affects an estimated 25 percent of Americans, including an estimated 20 percent of children, who have never had a drop of alcohol. Cases of NAFLD have even been reported in children as young as three years old. This may sound like an impossibility. But did you know that most infant formulas contain the sugar equivalent of a can of Coca-Cola?

Ditto for many baby foods, which can contain as much sugar and harmful trans fats as chocolate cookies or cheeseburgers. Babies are methodically “poisoned” with exorbitant amounts of refined sugar and processed fructose from day one, so it’s really no wonder that so many of our youngsters struggle with weight issues and associated diseases. As explained in Scientific American:12
“NAFLD describes the accumulation of fat in hepatocytes, or liver cells, in excessive amounts. These fats are typically triglycerides, which the body naturally stores and creates from calories that it doesn’t need right away. Normally these fats are burned off for energy, but if the body is overwhelmed with calories and a lack of exercise, then the triglycerides are simply never released. They instead accumulate in the liver and cause NAFLD, which can lead to inflammation, scarring, liver dysfunction and even liver cancer.”

Wrong Dietary Guidelines Has Led to Flawed Medical Interventions, Too

Since the cholesterol hypothesis is false, this also means that the recommended therapies—low-fat, low-cholesterol diet, and cholesterol lowering medications—are doing more harm than good. Statin treatment, for example, is largely harmful, costly, and has transformed millions of people into patients whose health is being adversely impacted by the drug. As noted in the featured video, we now know a whole lot more about HDL and LDL, commonly referred to as “good” and “bad” cholesterol respectively, although that is also a bit of a fallacy.

Depending on the size of the particles, LDL may be either harmful or harmless, so LDL is not necessarily “bad” across the board. The issue of particle sizes is discussed in greater detail in my 2013 interview with Chris Kresser, L.Ac. If you’ve had your cholesterol levels checked, your doctor most likely tested your total cholesterol, LDL cholesterol, HDL cholesterol, and triglycerides. But we now know those are not accurate predictors for cardiovascular disease risk.

A far more accurate predictor is your LDL particle number, the test for which is called an NMR Lipoprofile. It’s easy to get and all major labs offer it, including LabCorp and Quest. Most insurance policies cover the test as well. Best of all, even if your doctor were to refuse to order it, you can order it yourself via third-party intermediaries like Direct Labs, or you can order the test online, and get blood drawn locally. Also:

Statins Are Based on a Flawed Premise

Part of the reason why cholesterol-lowering drugs like statins are ineffective for heart disease prevention (besides the fact that the drug causes heart disease as a side effect) is that drugs cannot address the real cause of heart disease, which is insulin and leptin resistance, which in turn increase your LDL particle number via a number of different mechanisms. While some genetic predisposition can play a role, insulin and leptin resistance is primarily caused by a combination of factors that are epidemic in our modern lifestyle:

For Heart Health, Focus on Boosting Your HDL

A healthy diet is foundational for optimal health, and step number one is to ignore the advice to eat a low-fat, low-cholesterol diet. Other strategies that will help reduce your risk of heart disease include the following:13 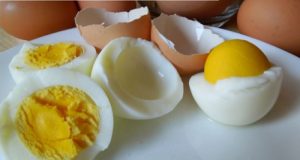 Here are present only twelve of the many mighty effects...

TrendingThisMinute Team - March 7, 2016
Eggs are one of the easiest and the cheapest way to take in more proteins.They increase daily protein count, also great for boosting your...