new study adds even more benefits to the already impressive pile than olive oil can boast — it protects your brain from Alzheimer’s and improves your synapses.

Olive oil is good for you

Extra-virgin olive oil is a key component of the Mediterranean Diet, one of the few diets which have been constantly and scientifically proven to yield substantial health benefits. Olive oil itself has substantial benefits and is one of the healthiest types of fats you can consume. Now, a new study focused on the mechanism through which olive oil can protect your brain.

“Consumption of extra virgin olive oil (EVOO), a major component of the Mediterranean diet, has been associated with reduced incidence of Alzheimer’s disease (AD). However, the mechanisms involved in this protective action remain to be fully elucidated,” the study reads.

Lead investigator Dr. Domenico Praticò – a professor in the departments of Pharmacology and Microbiology and the Center for Translational Medicine at the Lewis Katz School of Medicine at Temple University (LKSOM) in Philadelphia, PA believes that this study brings us closer not only to prevention but also to the reversal of Alzheimer’s. He and his colleagues carried this study and mice and found that mice with EVOO-enriched diets had better memories and learning abilities compared to those who didn’t.

At a closer look, researchers also learned that mice who consumed more olive oil had better functioning synapses — connections between neurons. But it gets even better.

Olive oil reduces brain inflammation and activates the autophagy process, cleaning some of the intracellular debris and toxins in the process. This debris is strongly associated with an onset of Alzheimer’s, and this finding indicates that the oil would prevent and tackle the disease directly.

“Thanks to the autophagy activation, memory and synaptic integrity were preserved, and the pathological effects in animals otherwise destined to develop Alzheimer’s disease were significantly reduced,” Pratico said. “We want to know whether olive oil added at a later time point in the diet can stop or reverse the disease.”

“This is an exciting finding for us. Thanks to the autophagy activation, memory, and synaptic integrity were preserved, and the pathological effects in animals otherwise destined to develop Alzheimer’s disease were significantly reduced,” the researcher added.

Next, they want to conduct a similar experiment later in the onset of the disease and see if similar trends are noticed.

The thing is, eating olive oil once or twice does nothing — you need to introduce it firmly into your diet to reap the benefits, but that’s definitely worth it. Not only does it taste good and provide good, healthy fats for your body, but the data presented in the current paper demonstrate that chronic administration of a diet enriched with EVOO results in an amelioration of working memory, spatial learning, and synaptic pathology. The case for olive oil functioning as a prevention tool against Alzheimer’s seems quite strong, so there are solid, scientific reasons to opt for this type of oil.

However, it’s not clear if it could counteract the disease once it’s already set in. As impressive as olive oil is, it might become even more powerful as a therapeutic tool.

“Usually when a patient sees a doctor for suspected symptoms of dementia, the disease is already present,” Dr. Praticò explains. “We want to know whether olive oil added at a later time point in the diet can stop or reverse the disease.”

Considering that over 5 million Americans suffer from Alzheimer’s and the figure is expected to almost triple to 14 million by 2050, having such a simple and effective tool to combat Alzheimer’s could prove immensely useful. 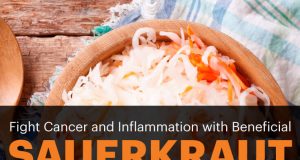 TrendingThisMinute Team - December 7, 2016
Sauerkraut, a form of fermented cabbage, has been popular throughout Central Europe for hundreds of years. Sauerkraut combines one of the healthiest foods there...