If you had come up with a great invention, you’d want to share it with everyone, right? In fact, if it is something useful and phenomenal that is how you would make money and help others around the world.

In 1975, an employee working for the large camera company Kodak went to his boss and said that he had invented the first-ever digital camera. When you think about it, everyone nowadays uses digital cameras; in fact, many forget that we even started off with film cameras. So … why did it take so long for the digital camera to become available for the public? That’s because Kodak told this employee that a digital camera was not useful and to forget he ever had that idea.

The employee, Steve Sasson, had begun working at Kodak in 1973. He started thinking to himself whether a charged coupled device (CCD) had any practical use. Because of this stray thought, he came up with a series of ideas and steps of how to create a digital camera, as well as a device to display the photos after they had been taken.

By 1975, Sasson was ready to take his ideas and his steps in the process to his bosses at Kodak. At the time he demonstrated the camera, it took 50 milliseconds to capture the photo and 23 seconds to display it on the device he came up with. Afterwards, Sasson would take the images and put them on a cassette tape. He would then put the cassette tape into a player, where it would take 30 seconds to process the 100 by 100 black and white photo on the screen.

When it was first shown, the Times explains that it was a rather lengthy process as well as a device that needed many parts to simply produce the photo. The Times also wrote that Sasson had chosen interesting parts to complete this new way of producing photos. They wrote that he had a digital cassette recorder, a Super-8 movie camera, an analog-digital converter, and several other pieces that were all connected to a few circuit boards.

Sasson’s bosses were clearly unimpressed, telling him that nobody would ever want to look at their photos on a large TV screen. Sasson tried to tell his bosses that while the images weren’t very clear at the time, the quality would get better quickly if he was able to work on it a little longer. Because of the rapid development of technology over the years, Sasson would have been able to make his product even better in quality and clarity. Thankfully, he was able to keep working on his invention despite his bosses’ skepticism.

By 1989, Sasson and Robert Hills had made the first DSLR camera. This wasn’t exactly a prototype, but it was similar to the ones that many businesses sell today. In fact, the camera had even used a memory card and had made the image smaller to view.

While it would have been a major seller for Kodak, Kodak still refused to accept the new model. They believed that it would plummet their film sales. At that time, Kodak had made money from everything possible when it came to printing and selling film. Because of this, Kodak was too greedy to give it up for the technological advancement Sasson had created.

Sasson had told The New York Times that when he and Hills made the camera, the argument was over. It was all simply a matter of time before someone else came up with the digital camera and began selling it. This was a major step forward, yet Kodak refused to even try to sell it or see if the public would be interested. Because of this, the camera was never tried by the public.

Kodak made money off of the digital camera patent until it ran out in 2007; they actually made billions off of it. However, by the time the company finally gave in to the digital aspect of cameras, it was too late. Kodak eventually had to file for bankruptcy in 2012. 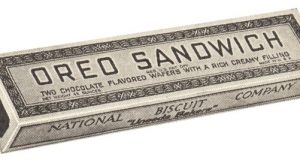 One Century of Sweetness: Cool photos show the evolution of Oreo...

TrendingThisMinute Team - March 21, 2016
Oreo is the best-selling cookie in the United States since its introduction in 1912.In 2012 Oreo celebrated its 100th birthday and in name of the...