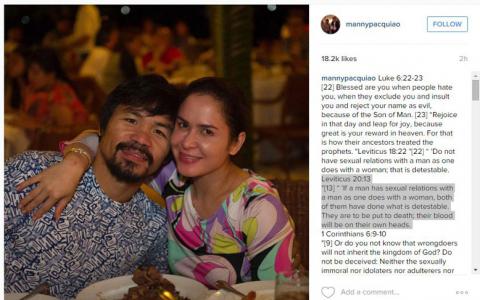 MANILA – After his controversial statement on same-sex marriage, followed by an eventual apology, boxing champ and legislator Manny Pacquiao took to Instagram early Thursday morning to say that homosexuals must be “put to death.”

The Instagram post, which showed a photo of the boxer-politician with his wife Jinkee, earned more than 18,000 likes before it was deleted at around 3 a.m. on Thursday.

Back in 2012, Pacquiao figured in a similar controversy when he was accused of citing Leviticus and suggesting that homosexuals be “put to death.”

Back then, the boxing champ denied citing the Bible verse, claiming he had not read Leviticus yet.

That controversy led to The Grove mall in Los Angeles canceling is appearance in the popular events place.

In the since-deleted post, Pacquiao had some words for those criticizing him because of his Christian evangelist faith.

“Blessed are you when people hate you, when they exclude you and insult you and reject your name as evil, because of the Son of Man,’ captioned Pacquiao, citing the Gospel according to Luke. “Rejoice in that day and leap for joy, because great is your reward in heaven. For that is how their ancestors treated the prophets.”

Pacquiao, in an interview Wednesday on DZMM Teleradyo, said he is in favor of the death penalty.

He said the death penalty is “biblical.”

Pacquiao, who is running for a Senate seat, asked the audience to read Romans 13:1-7 from the Old Testament to understand his position.

According to the Book of Romans, “Everyone must submit to governing authorities. For all authority comes from God, and those in positions of authority have been placed there by God. So anyone who rebels against authority is rebelling against what God has instituted, and they will be punished.”

Pacquiao earlier apologized for saying people in a same-sex marriage are “worse than animals”. 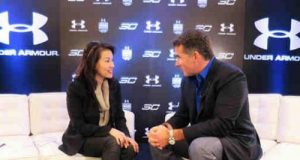 TrendingThisMinute Team - March 24, 2016
One of the world’s most recognized Chief Executive Officer (CEO), Kevin Plank of Under Armour shared his Filipino connection during his first time visiting...