Jordan Clarkson has Filipino blood, and he’s obviously proud of it.

In a series of photos posted on Instagram, the Filipino-American Cleveland Cavalier was shown practicing on US Independence Day wearing a t-shirt with the Philippine flag on it.

Clarkson has previously expressed his desire to play for the Philippine flag in international competitions, but he has yet to get a green light from FIBA to allow him to compete as a local.

The former LA Laker is still open to wearing the Filipino jersey in the near future. 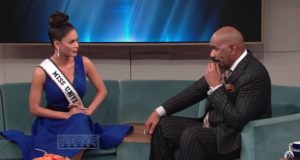