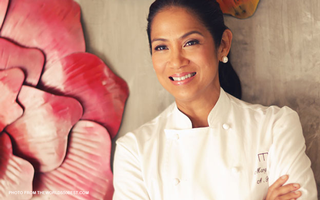 Metro Manila (CNN Philippines) — Before international chef and restaurateur Margarita Forés was hailed Asia’s Best Female Chef of 2016 by Asia’s 50 Best Restaurants, she was first an accountant then a career woman in the fashion business.

She revealed that her jump from the number-oriented industry, to the business of fashion, to the food world was not a deliberate choice, but a choice driven by her heart and passion.

Forés said in an interview with CNN Philippines on Monday (January 18), that her degree in accounting was the result of her grandfather’s convincing.

“I’m a CPA [certified public accountant] by degree but it was not really what I wanted to do. It was just an advice I took from my grandfather because he told me if you’re not sure on what you want to do in life, just make sure you know a little bit of accounting.”

In the early 1980s, Forés ventured to New York City and worked for the fur licensee of fashion designer Valentino. She eventually got a job at the main Valentino office.

Her work in the Valentino fashion house led her to love everything Italian, including Italian cuisine.

“I worked in fashion when I was in New York. That was very interesting but I think what it did was made me fall in love with everything Italian,” she said.

She also shared how her love for food grew during her stay in the Big Apple and in the walls of Valentino.

“I would like cook with my friends at night and just get together as an excuse to be able to make pasta for people and in a way it felt like that [food and cooking] got my gut a little bit more than the fashion part, so it really was not like a deliberate choice,” she said.

She gained further appreciation for authentic Italian cuisine during a tour of Italy in 1986. It was there that her culinary style evolved, cooking in home kitchens and exploring markets in Florence, Milan, and Rome.

Her passion for cooking Italian food brought her to the culinary world, where she is now hailed as one of the best.

She shared that despite her success now, she had no idea at first at how the food industry worked.

“I was really kind of clueless, but I just put my heart into it and I kind of created standards in the way I would look for the standards in restaurants. I think that’s the compass that I’ve used through the years to make sure that each concept is successful.”

She attributes the success of the 18-year-old Cibo to the type of service it offers and to the consistency it has maintained.

“Maybe a lot of it is the consistency of the product as well as a certain brand of service, I guess that I’ve kind of nurtured it through the years,” Forés said.