Trending This Minute
Home Celebrity 20 Celebs We Had No Idea Dropped Out Of School Before They...
SHARE
Facebook
Twitter
Education is always going to be important as we get older, but a lot of people don’t really consider that there is more than one way to learn.These celebrities either didn’t fit in with their high school crowd or had bigger dreams in mind and left to pursue a life of the rich and famous, and it worked!

When she was 19, she decided to drop out because she really wanted to focus on her music. That was clearly the best decision for her, wouldn’t you agree?

2. Brad Pitt was majoring in journalism before he dropped out just two weeks shy of graduating.

“It wasn’t leaving something behind, it was heading for something that was nascent and ill-defined. I did not know what it would be when I got to L.A., and to me not knowing that has always been the most exciting thing about making a trip,” he explained.

3. Christina Applegate had acted occasionally as a child, but it wasn’t until she landed the spot on Married… With Children that she dropped out of school.

She was just 16 at the time, but you’d be a fool to turn down an opportunity like that!

4. Cameron Diaz gave up her high school education to begin modeling when she was 16.

Her first acting role didn’t come until she was 21 when she landed the part in The Mask with Jim Carrey.

5. Cindy Crawford was her high school valedictorian, and even earned a scholarship to study chemical engineering.

She ended up dropping out after one semester to pursue a modeling career instead, and clearly, that was the right call. 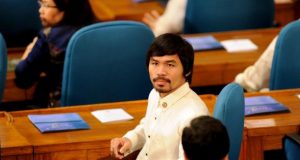