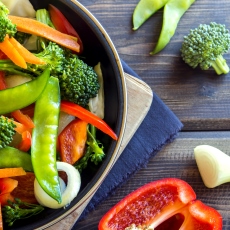 June 18, 2003 — Researchers have long known that a strict vegetarian diet — one that excludes all animal products — can lead to vitamin B-12 deficiency, and possibly heart disease. Now, new research suggests that even those who follow a more lenient vegetarian diet are also at risk.

In the July issue of the American Journal of Clinical Nutrition, German researchers tracked 174 apparently healthy people living in Germany and the Netherlands.

They found that 92% of the vegans they studied — those who ate the strictest vegetarian diet, which shuns all animal products, including milk and eggs — had vitamin B12 deficiency. But two in three people who followed a vegetarian diet that included milk and eggs as their only animal foods also were deficient. Only 5% of those who consumed meats had vitamin B12 deficiency.

“As the number of vegetarians is increasing worldwide, we have special concerns about some health aspects of this diet,” lead researcher Wolfgang Herrmann, MD, PhD, tells WebMD. “We have a particular concern over vitamin B12 status being regularly monitored in vegetarians — most importantly, in pregnant women, nursing mothers, children of vegetarian mothers and on macrobiotic diets, elderly vegetarians, and people who already have atherosclerosis.”

Unlike some other B vitamins, B12 is not found in any plant food other than fortified cereals. It is, however, abundant in many meats and fish, and in smaller amounts in milk and eggs. This makes it difficult for people following a strict vegetarian diet to get the necessary amount of vitamin B12.

Meat Eaters: This Includes You
Even young, healthy, vitamin-taking meat-eaters may not be getting enough B12, according to Tufts University nutritionist Katherine Tucker, PhD.

In a study published three years ago, also in the American Journal of Clinical Nutrition, she found that nearly 40% of 3,000 adults under age 50 had blood levels of vitamin B12 low enough to cause problems.

“There were very few vegetarians in our study, and a lot were taking vitamin supplements,” she tells WebMD. “There really seem to be a lot of absorption problems, even in younger people. One theory is the increased use of antacids may be blocking the absorption of B12.”

The good news: It is virtually impossible to consume too much B12, since it has a very low potential for toxicity. According to the Institute of Medicine, “No adverse effects have been associated with excess vitamin B12 intake from food and supplements in healthy individuals.”

Tucker’s advice: “If you are a vegetarian and have been for a long time, if you are taking antacids, or are getting older and may be having some problems, or are just concerned, you can safely take vitamin supplements at levels of 500 to 1,000 micrograms (1 milligram). Fortified cereals may not be enough.”

Your Body and Vitamin B12
Vitamin B12 helps maintain healthy nerve and red blood cells and is also needed to make DNA, which is why it’s especially important that pregnant and nursing women consume enough.

A blood test is the best way to test for vitamin B12 deficiency, and Herrmann recommends that all vegetarians get tested every year.