One of the world’s most recognized Chief Executive Officer (CEO), Kevin Plank of Under Armour shared his Filipino 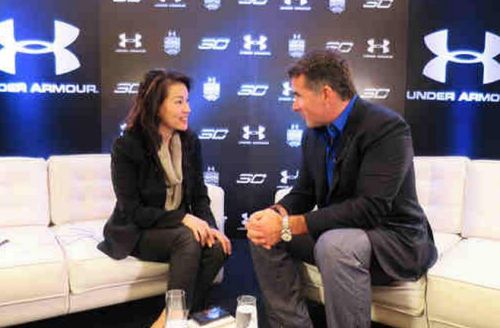 connection during his first time visiting the country this weekend. According to the Under Armour CEO, he has never been to the country but really feels home.

The self-made billionaire Kevin Plank, revealed during an interview with ANC about his Filipino connection. The billionaire revealed that he is really interested to be here in the Philippines with his children and wife’shome country.

In an exclusive interview with ANC regarding his company’s plans to expand its presence in Asia particularly in the Philippines, the billionaire was quoted as saying “It is interesting to be here with my wife and children’s home country,” he stated.

Kevin Plank’s wife Desiree Jacqueline “D.J.” Guerzon is a Filipino-American who grew up in the United States of America. They have two kids an 11-year-old boy and an 11-year-old daughter whom they brought her in the Philippines during Under Armour’s visit to Manila with Stephen Curry.

The billionaire founder of the American clothing and sneaker brand, Under Armour also revealed that he and his wife D.J. went on the same prom together, with different dates in the same car, and met again in school and dated for 10 years until they finally got married.

In case you haven’t heard, Game of Thrones is a little show on HBO that has literally…