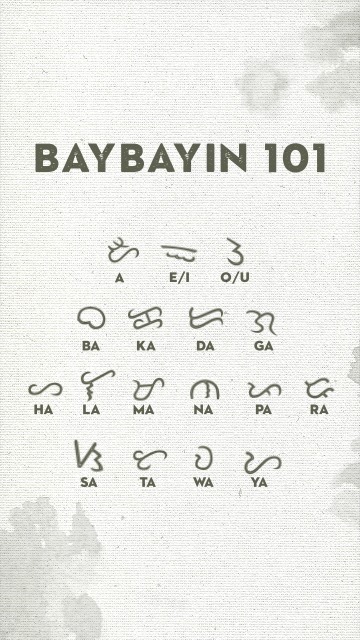 Baybayin is an ancient script used primarily by the Tagalog people. Baybayin is an indigenous Indic script that has been widely used in traditional Tagalog domains. It is one of many suyat scripts in the Philippines. It continued to be used during the early part of the Spanish colonization of the Philippines until largely being supplanted by usage of the Latin alphabet. Baybayin is well known because it was carefully documented by scribes during the colonial era.

The term baybayín literally means “to spell, write, and syllabize” in Tagalog. Baybayin was extensively documented by the Spanish. Some have incorrectly attributed the name Alibata to it, but that term was coined by Paul Rodríguez Verzosa  after the arrangement of letters of the Arabic alphabet (alif, ba, ta (alibata), “f” having been eliminated for euphony’s sake). For the Visayans, it is called Kudlit-kabadlit.

It is one of a number of individual writing systems used in Southeast Asia, nearly all of which are abugidas where any consonant is pronounced with the inherent vowel a following it—diacritics being used to express other vowels. Many of these writing systems descended from ancient alphabets used in India over 2000 years ago.

The Archives of the University of Santo Tomas in Manila, one of the largest archives in the Philippines, currently possesses the world’s biggest collection of ancient writings in Baybayin script. The chambers which house the scripts are part of a tentative nomination to UNESCO World Heritage List that is still being deliberated on, along with the entire campus of the University of Santo Tomas.