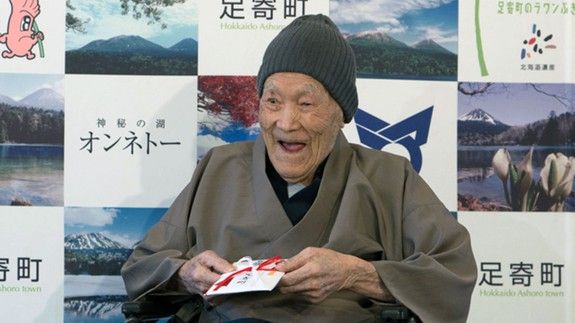 Relaxing is the secret to a long life — just ask the oldest man in the world.

Guinness World Records awarded the title of “Oldest Person Living (male)” to Masazo Nonaka on Tuesday, who has officially been alive for 112 years and 259 days.

Nonaka credits his longevity to “soaking in hot springs and eating sweets,” according to Guinness World Records. His daughter says that Nonaka strives to live a stress-free life, and doesn’t hesitate in telling someone off.

Nonaka’s daughter told Guinness World Records that “if he doesn’t want something, he’ll make sure everyone knows about it.”

He spends his lengthy retirement watching sumo wrestling on TV, reading the newspaper, and indulging in sweets. He also enjoys hanging out with his two cats, Haru and Kuro. If he doesn’t like his dinner, he’ll give it to them.

Nonaka was born on July 25, 1905, over a year before the Wright Brothers’ first flight and only months before Einstein published his theory of relativity. He inherits the title of Oldest Living Person from Francisco Nuñez Olivera, who passed away earlier this year at 113-years-old.

Nonaka celebrated his world record with cake in his hometown of Ashoro, Japan.