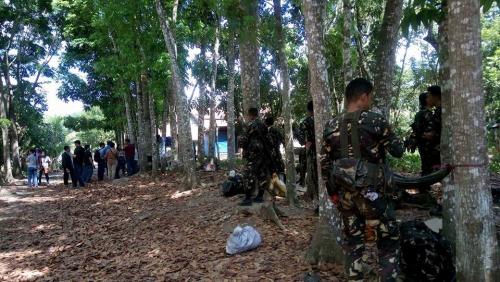 MANILA, Philippines — (UPDATE 2 – 2:58 p.m.) Kidapawan City Mayor Joseph Evangelista has threatened to revoke the business permit of the United Methodist Church in the Cotabato provincial capital for “harboring the leaders and members of illegal demonstrators” who had sought sanctuary there after last Friday’s bloody dispersal.

But the lawter of the church reminded Evangelista of “your responsibility as a public officer to maintain your office as a public trust of our people and refrain from using your office in furtherance of any injustice” and to “act justly, love mercy, and give everyone their due.”

In a separate statement, Methodist Bishop Ciriaco Francisco of the Davao Episcopal Area, who lives in the Kidapawan church, slammed the “abominable” use of live munitions against the protesting farmers and lumad, calling it a “murderous and terror-inducing act by the Philippine National Police.”

At the same time, he stressed that “the church asserts not only its right to protect the vulnerable ones, it is an imperative of our faith to are for the weak and the poor specially during the crucial moments when they are being beleaguered by the powerful and the mighty.”

The “notice of violation,” dated April 1, the day of the violence, which left three protesters killed and almost 200 other persons, including policemen, injured, was addressed to the board of trustees of the Spottswood Methodist Center: Rev. Juliet Exiomo, Rev. Manuel Ratisura, Jun Damansila and Lucita Siplao.

MAYOR EVANGELISTA’S ‘NOTICE OF VIOLATION’ TO THE TRUSTEES OF THE METHODIST CHURCH IN KIDAPAWAN:

Since Friday, scores of police personnel, some in full combat gear, have stationed themselves in front of the Methodist church, interrogating visitors and requiring them to sign a logbook before allowing them inside.

They had also blocked 300 farmers who arrived in Kidapawan from Makilala, 10 kilometers away, from entering the church compound, where donations of rice and other goods from private donors, including a number of show business personalities. The farmers from Makilala were finally allowed into the compound late Tuesday morning.

But even inside the compound, just meters from the residence of Methodist Bishop Ciriaco Francisco, Army soldiers have taken up positions.

In the notice, Evangelista told the Spottwood trustees “that it is violative of city ordinance for any business or establishment to abuse the privilege to do business or pursue an activity to the injury of public morals, peace and order and public safety, or when the place of business becomes a nuisance or is allowed to be used by disorderly characters, criminals or persons of ill repute.”

He then asked them to explain within five days why the church’s permit should not be revoked.

Replying to Evangelista, lawyer Emmanuel Mahipus, chancellor and legal counsel of the church, noted that the mayor failed to attach the supposed police report on which he based his notice “to enable our brethren you have unjustly implicated in the United Methodist Church to prepare and submit their intelligent and responsive explanation.”

THE REPLY TO MAYOR EVANGELISTA FROM METHODIST CHANCELLOR AND COUNSEL EMMANUEL MAHIPUS:

Neither, said Mahipus, had Evangelista cited “the specific law or provisions of ordinance” that the church had supposedly violated, saying it “is important … that the Methodist Institution you have implicated be appraised of any evidence in your hand that made you conclude the activities inside its premises are against the law, good morals and even our religious policy of helping the poor, the hungry and homeless.”

While stressing that the church respects authority and does not condone “any form of violent protest as a legitimate exercise of free speech or civil disobedience,” he said it was also “the duty of our churches to support those who suffer because of their stands of conscience and basic human needs” and “decry any form of violence, harassment, intimidation and threats against our people.”

In his statement, Francisco said: “By offering our sanctuary, we are not just being hospitable to our farmers and hungry ones, but we are making them as one amongst us. When we welcome them in our ‘home,’ our sanctuary, we do not only give our best, but we share with them our deep kinship. By offering them our sanctuaries, we recognize their suffering and hopes, their struggles and aspirations.”

He called on members of the church to let the act of giving sanctuary to the protesters “strengthen our unity. We must not let the enemies of life divide us, but let the peace that is built on compassion and understanding lead us to where our hearts should be — Justice, Peace and Truth.”