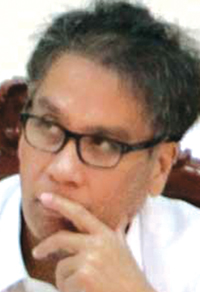 Roxas voiced the opinion during a “Meet Your Candidates” forum organized by alumni of American business schools such as Harvard, Kellog and Wharton, when he was asked if he thought he did enough during his stint as Department of Transportation and Communications (DoTC) secretary from June 2011 to October 2012.

Roxas responded by saying there was “original sin” in the MRT contract.
“This is a contract that started out in original sin. The contract itself was anomalous and the contract binds the government to continue this program,” he noted.

Roxas went further and accused the past administrations of anomaly.
He cited that the MRT contract only allows the operator to buy new trains and assures the operator of 15 percent return.

“You tell me whether that’s anomalous or not,” quipped Roxas.

Businessmen from the audience, however, noticed that while Roxas was quick to point fingers, he was unaware of the correct facts of the case. The contract in fact originally guaranteed 21 percent return for investors when Aquino first offered it out in 1991, to entice investors to put in capital for the building of the very first MRT in the country at a time when government finances were still recovering from the Marcos years. This was labeled a priority project of the Cory administration.

Ramos then brought this rate of return down from 21 percent to 15 percent.

“We were shocked that (Roxas) blamed the mother of his boss and FVR for the MRT contract. It was very obvious that he does not understand the facts behind the MRT case. In fact, 15 percent was not anomalous but advantageous to the government because the Philippines was paying 25-year bonds during that time at 18percent. The MRT was actually getting less than what the Philippines was already paying then, given that the MRT-3 project also has a similar 25-year term. Roxas doesn’t understand the issue,” said a businessman in the audience who asked not to be named. “In fact, we know that the problems with the MRT only started after the DoTC took over maintenance of the train system.”

The DoTC entered into a build-operate-transfer (BOT) contract with MRT Corporation in 1995 after the Supreme Court ruled in favor of the project. The MRTC, a private consortium of companies, which includes Ayala Land, Metro Global Holdings, Greenfield Development, Anglo-Phil Holdings, Ramcar Inc., among others, owns the system until 2025, and is in charge of operation and maintenance, while the DoTC assumes all administrative functions such as regulation of fares and operations.

In 2012, DoTC took over maintenance of the MRT when an appointee of Roxas, Al Vitangcol, suddenly terminated the contract of the Sumitomo, who had been servicing the MRT from the start, and replaced it without bidding with PH Trams, an unqualified maintenance provider that was incorporated after DoTC awarded them the project.
DoTC was questioned by the Commission on Audit (CoA)for attempting to use approximately P4 billion of public funds in the Disbursement Allocation Program (DAP) to purchase trains for the privately-owned MRT3.
CoA disallowed the receipt by LRTA of P4.5billion from DoTC that was allocated supposedly to cover the expansion of the MRT-3 system in the acquisition of new light rail vehicles. This allocation was disallowed by the CoA because the transfer of the fund was made pursuant only to a memorandum of agreement between DoTC and LRTA without any supporting work program and with no bidding conducted by LRTA, the procurement agent by DoTC for the project.

CoA also mentioned that the release of fund is questionable as there is an existing BLT agreement between DoTC with MRTC.

The CoA, after discovering the anomaly, ordered the DoTC to return the money although DoTC still purchased said Chinese trains from Dalian Locomotive, a manufacturer without experience in double articulated light rail vehicles.
The first train body was delivered by Dalian behind schedule, without engines and therefore incapable of undergoing the required testing.