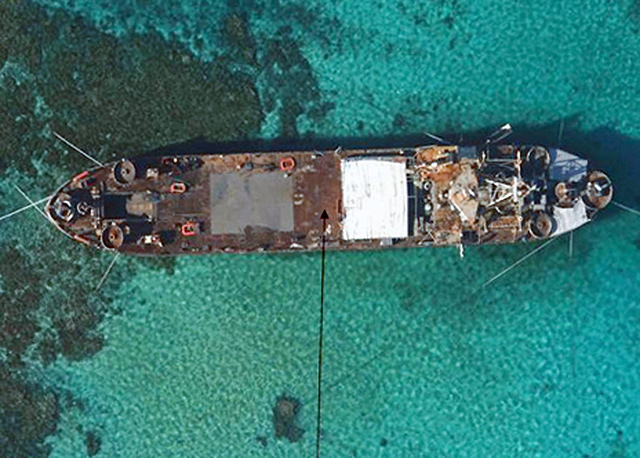 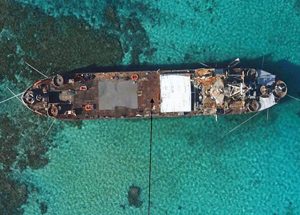 The USS LST-821, renamed the USS Harnett County (LST-821), USS Harnett County (AGP-821), My Tho HQ-800 (Vietnam) and finally LT 57 Sierra Madre (Philippine Navy) was an LST-542-class tank landing ship built for the United States Navy during World War II. She was named for Harnett County, North Carolina and was the only U.S. Naval vessel to bear the name. She served the US Navy in World War II and the Vietnam War. She was transferred to South Vietnam’s Republic of Vietnam Navy, which named her RVNS My Tho (HQ-800).

The US transferred Harnett County to the Republic of South Vietnam under the Security Assistance Program on 12 October 1970 and renamed RVNS My Tho (HQ-800). My Tho was one of the flotilla of thirty-five Republic of Vietnam Navy ships that sailed for Subic Bay after the fall of Saigon in April 1975.

She was transferred to the Philippines on 5 April 1976, which named her BRP Sierra Madre (LT-57). In 1999, the Philippine Navy ran her aground on the Ayungin Shoal to maintain their territorial claim in the area. In 2013, the New York Times reported on the life of the handful of marines stationed on board the Sierra Madre at Second Thomas Shoal and the vessel’s role in the geopolitics of the South China Sea. One may infer from the article that Sierra Madre will never sail again, however she has gained importance due to her role as an outpost in the Spratly Islands dispute.[2] The List of ships of the Philippine Navy no longer carries her as being in commission, however she has not officially been decommissioned either.

In September 2014, Rupert Wingfield-Hayes, reporting for the BBC, visited the Sierra Madre, which remains blockaded by the Chinese coastguard and supplies for the garrison of 11 Filipino marines are dropped by air. The ship is described as in a poor condition, “The ship’s sides are peppered with massive holes. Waves slosh through them right into the ship’s hold.” [7]