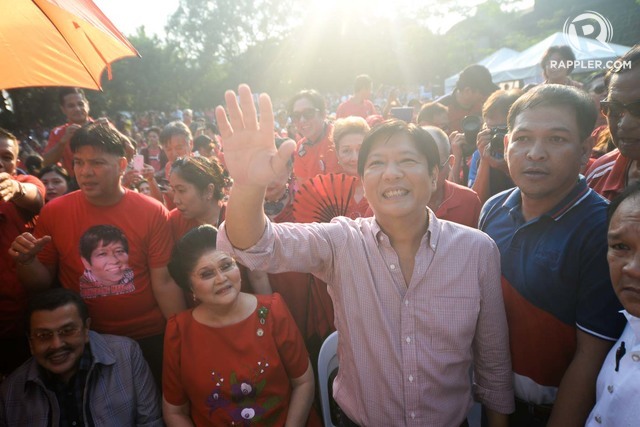 An apology would have been enough for the Filipino people, who are known to be forgiving, Aquino said at the presidential forum of the Foreign Correspondents Association of the Philippines (FOCAP) on Tuesday, October 27.

Aquino was asked if he believed that the Marcoses have something to apologize for, in reference to the human rights abuses committed during the Marcos regime.

“I’ve said that time and again for many decades, yes….The start of a solution is the admission of the problem, of the crime that begets the problem,” said Aquino,whose father, the late Senator Benigno “Ninoy” Aquino Jr, was among those detained upon the imposition of martial law.

He said the Marcos family members, some of whom have political careers, could have told the Filipino people: “We had this opportunity to turn this country great as our father promised – it didn’t happen. We apologize, we want to make amends.”

Aquino added: “That I think would have been very acceptable. We are a forgiving people as a general rule. But they have statements that there’s nothing to apologize for.”

He questioned the Marcoses’ denial of human rights abuses committed during martial rule, as he recounted the experience of not only his own father but former household employees as well.

His father was detained for 7 years after martial law was declared in 1972. Their former family driver and his wife, who both worked for them prior to the imposition of martial rule, were detained just because of their association with the Aquino family.

“If there’s a denial of what happened, is there also a statement that there is no recognition that things have to be corrected down the line? And therefore is there a promise that there will be no repetition of the same? That is our question,” Aquino said.

Marcos’ son, Senator Ferdinand “Bongbong” Marcos Jr, is running for vice president in the 2016 elections. The senator had repeatedly said he is lucky to be the “son of a president who has done so much” and believed there is nothing his family should apologize for.

Aquino said proof of the abuses committed during martial rule is the Human Rights Compensation Law .

“The law by itself is recognition. A government oppressed its people, that’s why there is need to compensate the people,” Aquino said. “It became its oppressor as opposed to its protector, and servant.”

The President warned against the threat of “revisionists” seeking to sanitize the past. “The sad reality is even people like Hitler have their revisionists. There are some quarters who talk about the Holocaust as if it didn’t happen. So even that is not a certainty.”

“Leave it for the future generations to study what transpired in the hope that it can be avoided down the line,” he said.

Responding to questions, Aquino downplayed the seeming “resurgence” of the Marcoses reflected in numerous posts in social media and the Internet glorifying the Marcos regime.

“There is a resurgence of support? No, no. I think the answer to that is very obvious. I don’t think so,” he said.

“I have faith in my bosses, the Filipino people. There was nothing that has caused me to change the faith that they are able to discern,” Aquino added.

“I think what we should demonstrate or what should be highlighted is the fact that there is a period in time that contrary opinions were not encouraged. In our watch, contrary opinions are part and parcel and protected in the democratic space that we have managed to really strengthen within our watch. That is, I think, proof that the democratic system in this country works,” Aquino said. – Rappler.com

Without cheating, can you name the man in the picture above? It’s okay if you…